BMI has released its annual mobile music market projections for 2008 and figures for 2007, projecting that ringback tones will surpass $210 million in U.S. retail sales during calendar year 2008, up 50% from BMI’s 2007 market estimate of $140 million. A ringback tone is a musical work that is performed to the caller when they place a call to a participating mobile subscriber. 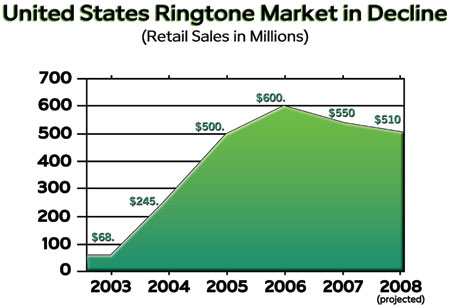 BMI’s conclusions are based on comprehensive data derived from the buying behavior of more than 200 million of the current 220 million United States mobile subscribers.

“The market for ringback tones has grown stronger than we originally forecasted last year,” said Richard Conlon, BMI Vice President, New Media & Strategic Development. “Its growth, coupled with the positive gains that streaming mobile media have made in 2008 alone, supports our bullish point of view on the growth of the mobile entertainment business. We see gains in mobile audio and mobile television style services in the coming years as well. As we forecasted last year, the ringtone market continues to decline as the novelty phase wears off and lower-priced substitutional products come to market.” 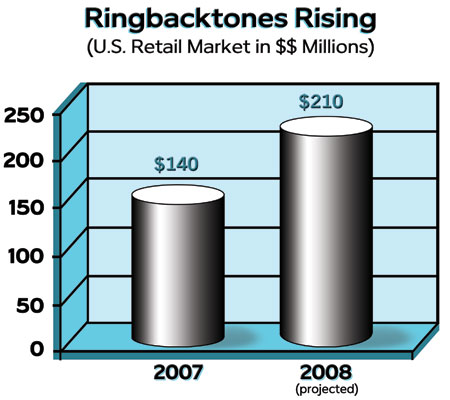 BMI tracks titles and revenues associated with ringback tone services, streaming audio, streaming audio/visual and ringback tone services.  The company’s database of earnings and titles is believed to be the most comprehensive in the industry. BMI uses the data that it collects to distribute public performance royalties on a pro-rated basis to its affiliated songwriters, composers and music publishers.