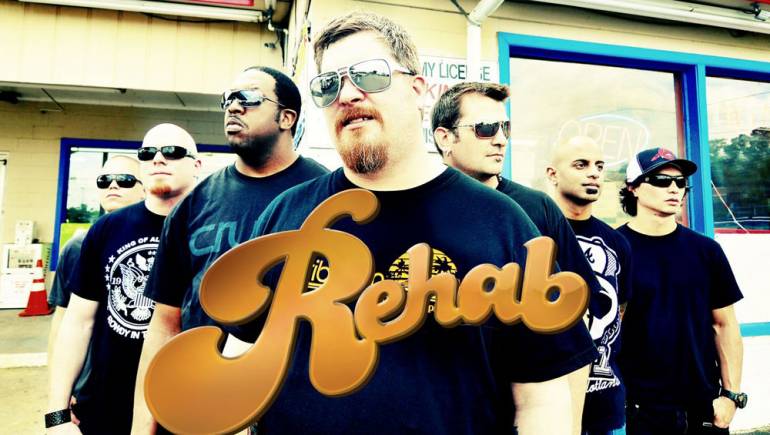 Underscoring their chosen name, Rehab has undergone a befitting amount of stylistic shifts and self-discovery over the past decade.

Now in their tenth year, Rehab has emerged from a concentrated recording effort with Welcome Home, the group’s third major label album, released last month. And, as bandmate Demun Jones puts it, the project captures “a more mature musical expression … a new momentum.”

Steeped in nostalgia and down-home candor, Welcome Home expands upon the balance of Rehab’s characteristic mish-mash of rock and hip-hop that the band struck with “Bartender Song.” Writing and recording began early this year in Atlanta, but as Jones notes, the vibe was off and “it wasn’t what we needed it to be for the record.”

The remedy? A trip south, as it turned out, to Danny Boone’s home studio in Warner Robins—a mere 20 miles from Macon, GA, the old base of southern rock legends (and Rehab-attested influence) the Allman Brothers Band. It was in Danny’s backyard and recording studio where Rehab “made serious progress in a short amount of time.”

And southern rock, according to the band, is unquestionably the “the anchor” of Welcome Home. Having opened for—and taken cues from—some of the genre’s heaviest-hitters, namely Kid Rock and Uncle Kracker, Rehab sits poised to optimize its new momentum on the road, in support of the album.

If there’s one thing Danny Boone and co. have learned from relentless stretches of touring, it’s how to build a live show into a galvanizing experience. Deeming the stage the new platform on which musicians will either sink or swim, Demun Jones asserts the group is prepared for such a change, declaring: “Everyone needs to see a Rehab show at least one time … listening to a Rehab record is one thing, a Rehab show is a whole ‘nother thing.”