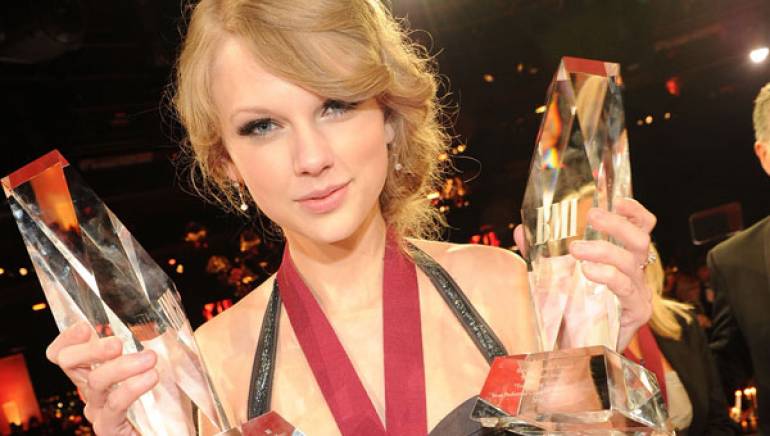 Taylor Swift wins Song and Songwriter of the Year at the 2010 BMI Country Music Awards in Nashville. Photo: Rick Diamond/Getty Images for BMI

The name Taylor Swift is synonymous with record-shattering. More than a superstar, Swift has become a supernova. And she’s done it with a rare combination of warmth, authenticity, and prodigious, God-given talent.

She was already the youngest ever to win BMI Pop Song of the Year or to receive the rarely-bestowed BMI President’s Award, both of which she earned earlier this year. But last night, during the 58th Annual BMI Country Music Awards in Nashville, Swift entered the record books yet again as the only songwriter ever to win BMI Country Song of the Year three years in a row. Co-written with frequent collaborator Liz Rose, 2010 winner “You Belong With Me” is preceded by “Love Story” from 2009 and “Teardrops on My Guitar” from 2008.

Then, lightening struck twice: Swift also became the youngest writer ever to be named BMI Country Songwriter of the Year. She is followed closely by Whisperin’ Bill Anderson and Johnny Cash, who won the coveted honor at 23 in 1960 and 24 in 1956, respectively. That’s heady company, but Swift is proving it’s also the company she should keep.