Posted in MusicWorld on September 14, 2011 by Ted Drozdowski 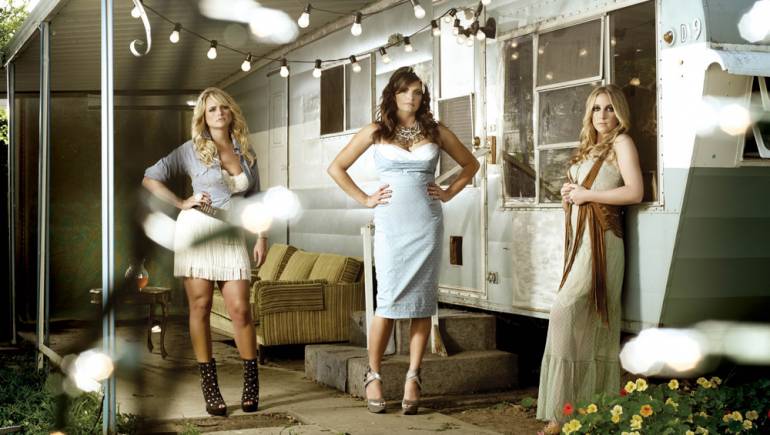 The name Pistol Annies evokes a gang of six-gun toting bad women from the days of Deadwood, which isn’t entirely off the mark. Despite their angelic harmonies, the trio of hotshot country singer-songwriters Ashley Monroe, Miranda Lambert and Angaleena Presley bring desperado attitude to their music.

“When we started co-writing, the songs naturally ended up being about rowdy outlaw women who stand up for themselves,” Monroe explains. “Because there’s a lot of women like that in America, we had no problem writing real-life stories.”

Exhibit A: the first single and title cut from their debut Hell on Heels, which debuted at the top of the country charts. As Lambert, Presley and Monroe trade lead vocals, the song builds from an acoustic guitar and dobro intro to a soaring declaration of independence by a woman who “done made the Devil a deal” to transform herself into the ultimate heart-breaker.

It’s clever and campy, and, thanks to the trio’s chemistry, took just an hour to write. “That’s the way it is with us,” says Monroe. “We start talking about our lives, then a guitar comes out and the songs just flow.”

The Annies wrote all of Hell on Heels themselves save for “Family Feud,” where Lambert’s husband Blake Shelton was pressed into service. That tune essays the Annies’ serious side in its tale of greedy relatives descending on the house of a barely-cold matriarch to divvy up her possessions. “That’s something too many people I know have gone through,” Monroe observes.

Vocal and songwriting prowess aren’t the only qualities that make the Pistol Annies a potential supergroup. Unlike most country-pop, their sound is driven by acoustic instruments — albeit writ large by producer Frank Liddell, who’s also made albums with Lambert, Jack Ingram and Lee Ann Womack.

Monroe’s own story starts in Knoxville, Tennessee, where piano lessons and a love of music from Hank Williams to Dolly Parton to Lynyrd Skynyrd to Chopin defined her future. In 2002, then-teenaged Monroe moved to Nashville with her widowed mother and within a year had a publishing deal and signed to Columbia Records. Two singles including “I Don’t Want To,” a duet with Ronnie Dunn that reached number 37 on the country chart, were released in 2006, but the album was shelved for three years after her a&r man was fired.

Monroe’s luck has gotten better. A chance meeting with Jack White in the Nashville airport led to her singing on the Raconteurs’ 2008 single “Old Enough” plus a spot in the house band of White’s Third Man Records, where Monroe sang in the studio and on stage with Wanda Jackson for the rockabilly legend’s White produced The Party Ain’t Over. Monroe also has a solo album completed for Warner Bros.’ Los Angeles division.

“I’d love to see good things happen with the Pistol Annies and our solo careers,” Monroe says. “Miranda’s already a star, but this could open doors for me and Angaleena. The most important thing, though, is for me to keep making music, because that’s what I need to be happy.”