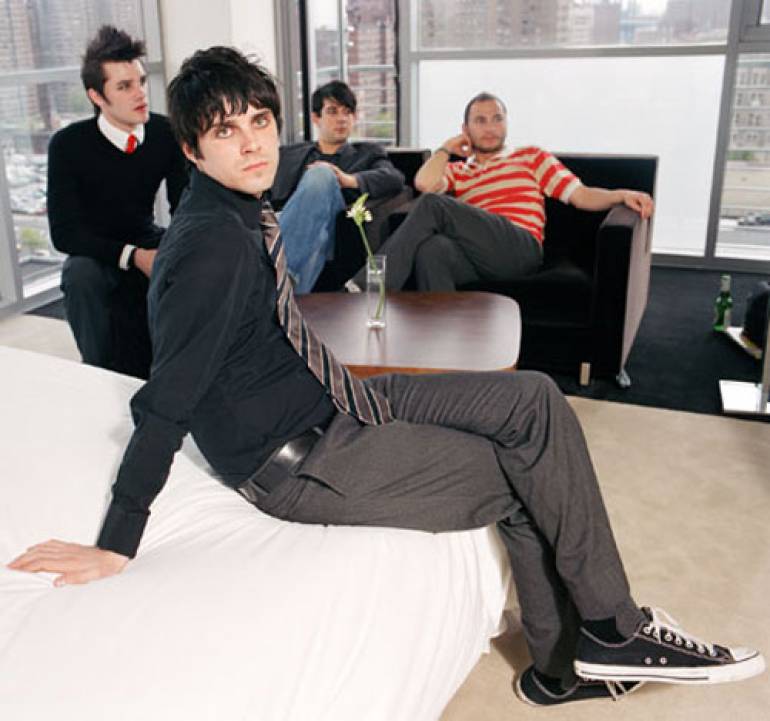 If you dig up the roots of Nightmare Of You, you will find their time in the Long Island underground music scene planted firmly at the base. Frontman Brandon Reilly first cut his teeth in various local hardcore bands, but it wasn’t until he signed on for lead guitar duty for visceral pop-punk group, the Movielife, that he was able to establish himself on a national scale. After four years (and a modern day punk touchstone with” A Forty Hour Train Back To Penn”), the Movielife eventually parted ways.

This time around Reilly steps forward as lead vocalist for Nightmare Of You, a band he formed in 2003 with high school friend Joseph McCaffrey, who had begun assisting Reilly with a few solo songs between his duties in the Movielife. Along with McCaffrey, fellow Long Islander Ryan Heil eventually filled in on bass and New York hardcore veteran Sammy Siegler (Rival Schools, CIV, Glassjaw) took over on drums. Though their credentials are noteworthy, you’d be remiss to let the past color how you will eventually hear their self-titled East West debut: a stunning album full of broad shoulder hooks and poetic interludes.

Recorded in Los Angeles with producer Jason Lader (protege of legendary music industry vet Rick Rubin), the record was a first for all parties involved, including Lader who, here, is making his credited production debut. It’s even being released as the inaugural disc through the band’s own label, the Bevonshire Label, named in honor of the dingy hotel they lived at during the album’s recording. Throughout Nightmare Of You, though, the band’s songs serve as a catalyst that will inevitably solidify their transformation from punk rock vets to accomplished songwriters, honing in on a more mature sound that their previous bands only seemed to hint at.

It is evident from the somber opening track “The Days Go By Oh So Slow” that the chunky guitar distortion of old has vanished in favor of clean string arrangements, creating a sound that is more reminiscent of the early 1980’s Manchester scene than any of the band members’ previous endeavors. But the emotional purging that has long been a part of hardcore’s loud-and-fast history still remains. “Writing is therapeutic,” Reilly insists. “I have [always] been dysfunctional that’s probably why my lyrics come across as dark. But you have to have a decent sense of humor about what cards you are dealt in life.”

The juxtaposition of memorable melodies and sardonic lyrics are bound to keep the listeners intrigued. The subtly haunting confessions of obsession in “I Want To Be Buried In Your Backyard” finds Reilly in particularly sweet and sour mood. But, moreover, Nightmare Of You defies simple categorization, and in a musical climate where most bands adhere to a formula of sandwiching catchy but disposable choruses between standardized verses, this is a new beginning and a witty breath of fresh air.