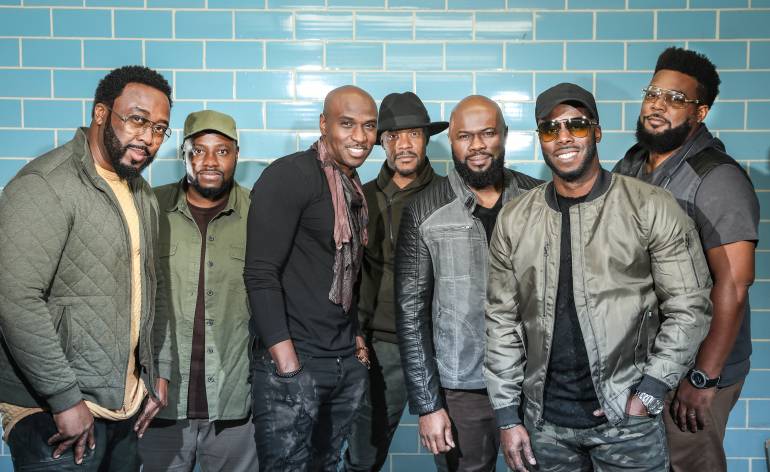 To call Naturally 7 simply a vocal group is something of an understatement. To try to sum up their music as harmony-laden or acapella also falls significantly short of really capturing what they do. To accurately describe the sound and aesthetic Naturally 7 has perfected over the last 19 years, the band had to coin its own term for it. The call it ‘Vocal Play,’ and it’s nothing short of phenomenal.

Formed in their native New York City in 1999, Naturally 7 came together out of its seven members’ love of classic songwriting, old school hip-hop, harmonizing and singing in church. Spearheaded by brothers Roger and Warren Thomas, the group initially wrestled with their approach. Pulled in two different directions, they couldn’t decide whether to perform as a traditional acapella ensemble or to pursue the route of a full band, augmenting their natural voices with amplified instrumentation. Inspired by their own vocal versatility, they decided to meld the two concepts into one, utilizing their astonishingly innovative and disciplined voices to essentially become the band. The end results are mind-blowing.

Over the course of their career, Naturally 7 have toured extensively, made numerous television appearances and have collaborated with everyone from Michal Bublé to Brian Eno. On the eve of the release of their seventh album, Both Sides Now, the gentlemen of Naturally 7 – Roger Thomas, Warren Thomas, Dwight Stewart, Rod Eldridge, Garfield Buckley, Kelvin “Kelz” Mitchell, Ricky Cort and new recruit Sean Simmonds –  paid BMI’s New York office a visit for both a candid discussion about their music and their creative process, and a special, breathtaking performance.

Before we discuss anything else, can you please define the term ‘Vocal Play’?

Roger Thomas, First baritone: Most people are familiar with the concept of a cappella, wherein you sing without instruments. ‘Vocal Play’ is when you become the instruments. It’s the idea of imitating and mimicking so that a person can hear it and recognize, ‘oh, that’s a harmonica’ or ‘oh, that must be a guitar.’ It’s very, very specific. The concept of a cappella focusses on people just singing oooohs and aaahhs, and other things that only the voice can do. Our thing is different. As we were becoming a band, at some point we had to call it something. People would say, “I’ve never heard a cappella like this,” so we coined the phrase “Vocal Play.”

Warren Thomas, Third tenor:  … and when we got to places in the early days and started to perform, people were saying, “This is not what I was expecting at all.”

How did you first come up with the concept?
RT: We started singing in church – just what everyone understands as basic, traditional a cappella singing. We’d been influenced by several other a cappella groups around, and they all had their different sounds and different things. At certain points, someone would remark to us that a particular harmony we did reminded them of the Bee Gees or the Beatles or Earth, Wind & Fire or Bobby McFerrin, and we realized we hadn’t yet found our thing. And so we went looking for our place in the sun. What could we bring to the table that didn’t yet exist on the planet Earth, that we knew of? I liken it to the work of a chef. When people taste something new, it’s not that they’re experiencing some new matter or some new food. It’s food that’s always been there, but the chef just mixed different things in different portions together that you have never tasted, and that’s basically what we have done. I’m in the vocal arrangement department, and I saw this jazz group out of Sweden imitating instruments, but they were a jazz group. I thought, “Wow, we should do that, but in R&B, gospel, funk, pop and hip-hop!”

We’re all originally from New York, and heavily influenced by hip-hop, so we’ve seen — from Doug E. Fresh to the Fat Boys – artists imitating and beatboxing and everything, so we started there with the drums, and then we added bass. Then, it was like, “Why don’t you do what the guitar would do?” and “Do what a synth would do!” It started from there, and once we had that established, we felt we had something. Then, we found that each guy could do something interesting that the others couldn’t do. Once we started to lean into that, that changed the whole goal.

We were on tour with Michal Bublé, and we could tell that it would take audiences about three or four songs before they’d start gasping. “Oh my God, it’s all their voices!” At first, they didn’t’ really understand, because the wall of sound that we’re giving is so much like a band that they just assume it’s some sort of backing track. But, we’d have specific songs that we would break things down, one by one, in the actual song, and they’d realize that it was happening right there on only those microphones. That was our goal.

We are joined by a new member of the Naturally 7 fold, Sean Simmonds, who’ll be stepping in to fill the shoes of the departing Garfield Buckley. Sean, is there a specific, defined role for you in the group, as yet? Do you know what instrument you’ll be mimicking?

Sean Simmonds, Second Tenor:  It’s more, I think, the register that I sing, which falls in line with first tenor, second tenor, third tenor etc., and that’s my place of comfort. For this case, it was the required part that I had to replace. It all came together, because I naturally sing that part. As far as instruments, I’m still trying to identify and define which particular instrument to perfect, and it may take some time. So, that part of the process is still in the works.

RT: You’re in a very interesting position, because I don’t think anybody’s ever interviewed us in this process while someone new is coming in. But Sean said another key thing, which is that most of the things that everybody in the group does are very organic. So, the person that sings bass is going to lean towards tubas, trombones and low-sounding instruments. Rod [Eldridge, First tenor] actually sings high, but he also speaks very, very fast – he can’t help himself – but that also helps him as our DJ, cutting and scratching and just doing all sorts of crazy things with his voice that leave the rest of us dumbfounded. In Sean’s case, we know that he fits the register, we know what his lead vocal is, we know what his harmonic skill might be, but exactly what instrument he’ll become? He will not necessarily be able to do the one of the guy leaving the group, which is harmonic. [Garfield Buckley, Second tenor] does an awesome harmonica. We’ve seen this in the group many times that when a member leaves , that particular instrument, as it was, never exists again. It’s just the way it is. But this is a new chapter, and you always hope that the sequel is as good as the previous chapter, if not better.

Being that you’re still such an unconventional ensemble, is your creative process different from the average band?

Warren Thomas, Third tenor: It’s not as different from a traditional band as you might think.

Dwight Stewart, Second baritone: I know a lot of a cappella groups come in and basically, everybody jumps into a part and a third, but we are definitely that structured type of a band where it’s like Roger always tried to build this wall of sound. How can we fill up this sonic spectrum, where the bass is going to sit here, drums are going to be here and guitars are going to fit there and there’ll be room for two guys singing harmony and guy singing lead. After a few minutes, you figure out, you hear it and find yourself going, “This is it!” That’s the goal.

Every way you think about the classic bands – like the Beatles, or whomever – and how they structure their harmonies, to the instrumentation to the lead singing, to the songwriting  – that’s the same thing we’re going for.

You’ve just released your seventh album, Both Sides Now. How does this album differ from your previous albums?

Rod Eldridge, First tenor: On every previous album, we really leaned into the “Vocal Play” concept and philosophy. For this album, we actually went back more to our roots, where we did less of the showcasing of our voices as instruments, and used them more just as our voices. It was special to us in a sense that it goes back to where we came from – singing beautiful harmonies in church. We did a lot more cover material on this album, as well. We always do covers, but for this we specifically said we were going to do classics and classical music in a way that had that classic vocal style.

RT: Most of our albums prior to this were mostly original material. For this album, we slipped two or three originals in there, but it’s basically a covers album. Usually, we come up with the concept, but we were approached by our label this time. In our regular set, we would do something like a Simon & Garfunkel song. In a particular piece this label person had seen, we were doing “Sound of Silence” and “Scarborough Fair” and a couple of other things, and he really liked that moment. He asked, “Can we do an entire album like that?” Our initial reaction, honestly, was “why?”, but it really is like going back to our roots. It’s all about the harmonics, and bringing out the beauty of a song. That’s the only reason we cover a song. We don’t choose a cover unless we feel we can bring something to the table.

Which is more pressure for you? Doing a cover song or an original song of your own?

RE: There’s definitely a certain pressure doing a cover, because it already has a history. There are people that love it. There are folks that will say, “That is my favorite song – what have you done to it?” There’s pressure because there’s an expectation there, already.

RT: At the same time, with a cappella groups, people expect covers. They expect re-interpretations of songs. We found out pretty early in our career that we could do original songs. One of the reasons for not doing original a cappella songs is that it puts people to sleep. That’s why so often a cappella groups don’t do original material. They do “The Lion Sleeps Tonight,” and they do “Yesterday,” but when they go to an original song, suddenly people start yawning. When you’re doing original songs, you can’t count on audiences knowing them. But we found out early in our career that we had some really strong songwriters, and when we got to that chorus – people wanted to hear it again. That was a challenge for us, too – and we love to meet that challenge.

Finally, what role has BMI played for you in your career thus far?

DS: Well, BMI help us collect our earnings every quarter – very important. And, I can tell you, any issues that I’ve had, Loretta Gadson has been amazing. She’s the reason we’re sitting here right now.

RS: Also, as a songwriter, there are some really, really great tips that come in BMI’s The Weekly.