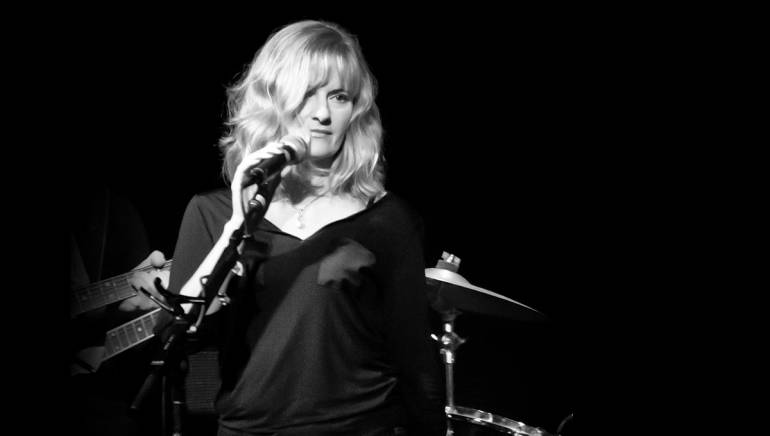 Over the years I’ve become familiar with the infamous studio stories involving celebrated prima-donnas like Barbra Streisand et al, who spent many a session brutalizing hapless engineers with between-take tantrums (“too loud,” “too soft,” “can’t read the lyrics,” “can’t stand these headphones,” etc.). Though she’s no Streisand (and thank God), working with my wife has nonetheless given me a little taste of what it must have been like for those control-room craftsmen, who, in addition to knowing exactly how to make the artiste in question sound great on tape, had to arrive at work each day armed with the patience of Job.  Like so many singers, in the studio my wife has what I like to think of as a “performance threshold” — that is, a limited number of attempts at cutting a complete vocal before giving way to fatigue, self-consciousness, and, at times, indignation when her husband suggests trying “just one more” over the talk-back.

And yet in spite of this, over the years, my wife’s finished masters have almost always wound up sounding quite superb. While much of this is due to her innate talent as a singer, I have also picked up various recording techniques — some of them technical, some psychological — that have proven essential for cutting vocals (not to mention preserving one’s marriage).

Level It
Most singers tend to emphasize certain phrases or passages during a recorded performance, and, often, that extra burst of exuberance results in unanticipated volume spikes. A basic limiter (or compressor-limiter), however, addresses these issues by controlling the peaks, giving you a much more uniform vocal sound. Lowering the device’s threshold (the point at which the limiter becomes “active”) while adjusting the amount of effect (i.e., the “attack/release” ratio) adds definition, while providing an “edgier” sound. When using compression, try to add the effect in small doses, lest you lose the natural dynamics of the vocal.

Double-Take
One of the oldest tricks in the book, double-tracking (cutting a duplicate version of the original vocal to a separate track) provides extra dimension while simultaneously covering any minor miscues during the initial pass. While double-tracking, some singers may expend too much energy trying to replicate the tone and phrasing of the original take. To avoid this, I usually mute the original track; even without hearing the first part, the vocalist will usually perform a second take that is nearly identical anyway (or at least good enough for double-tracking purposes). Though multiple vocal takes are typically “stacked” in mono, when mixing, you can sometimes achieve nice results by spreading the parts in stereo; for that matter, you could even try a third or fourth vocal overdub further down in the mix, just loud enough to add extra dimension without it being obvious to the listener.

‘Print’ It
Rather than always adding in vocal effects during the mix stage (i.e., “post-production”), consider “printing” reverb, delay or other effect being fed to the vocal mic during the take itself. Allowing the singer to “react” to the live effect that they’re hearing in their headphones often produces a very different kind of performance than you might achieve without using any coloration. While admittedly riskier than saving the processing for later, many engineers still prefer recording with the effect, since what you’re hearing during the take is what you’re getting as your final sound.

Different Mics for Different Types
Generations of home engineers have at one time or another sunk to one knee at the sight of some famous artist singing their guts out in front of some big fancy Neumann microphone. Indeed, the sensitivity and multiple pickup patterns of a fine studio condenser offers the kind of warmth and presence that most of us crave when cutting vocals — and, thanks to companies like RODE, Blue, et al, decent condenser mics can now be had without incurring a lot of debt. And yet even engineers equipped with a locker-full of choice mics have at times opted for something more mild-mannered, including trusty dynamic mics like the Electro-Voice RE20 “broadcast” model, or even a basic Shure SM57. Because the latter is normally associated with stage work, the SM57 or similar hand-held mic also provides a psychological advantage, since it doesn’t look like a big scary studio mic (suspended from an equally intimidating overhead boom stand).

Nor can it hurt to experiment using different mic settings and placement. When recording with a condenser, for instance, you would normally put the singer directly in front of the mic, just a few inches from the diaphragm, in order to get a full, warm sound (known as the “proximity effect”). For a more ambient, less direct sound, however, you could try pulling the microphone several feet back, adjust the height of the boom, have the singer turn slightly away from the mic, switch the pickup pattern from cardioid to omni, and so forth.

Are You Comfortable?
Having a roomful of top-notch equipment is one thing; even more important is having a comfortable environment for your singer to record in. Pianists or guitarists who are accustomed to singing and playing at the same time (like they would on stage) can feel awkward when overdubbing a lead vocal, simply because they don’t know what to do with their hands! One easy way to rectify that problem is to just let them play — even if you don’t actually record the instrument during the take (although it can’t hurt). If you don’t feel like dealing with the potential leakage issues, however, try putting the singer on a high stool (since many find it more comfortable to sit rather than stand during recording), or, at the very least, give them something to keep their hands busy — a bottle of water, some sheet music, etc.

The Faster, the Better
Above all, always try to cut the vocal parts in as few takes as possible while the singer’s energy level is still fresh. Many artists like to do complete passes, one after another, then choose the best performance and patch over any imperfections afterward. Whatever your strategy, make sure you record everything — even if you don’t get what you want in one pass, using a basic editing tool (such as Audacity), you’ll have the option to edit together a completed vocal master using portions of the various takes later on.