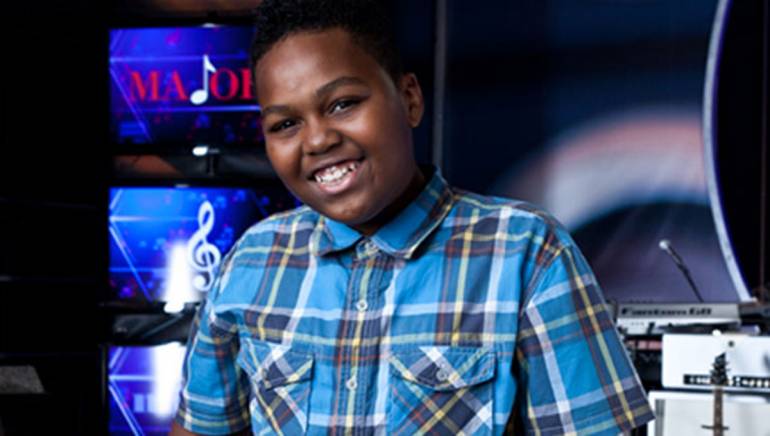 Last night, on the highly anticipated season finale of the popular reality singing show Majors and Minors, 14-year-old BMI writer and singer Michael Woodard took home the top prize of a music publishing deal and a record deal with RCA Records. Woodard, a sweet and gifted eighth grader from Philadelphia, won fans’ hearts with his incredible voice, positive attitude and infectious energy throughout the series.

Produced by Boardwalk Entertainment Group, in partnership with BMI and Sony Music Entertainment’s RCA/JIVE Label Group, Majors and Minors was the brainchild of BMI hit songwriter and Boardwalk principal Evan Bogart. The show debuted in April on the Hub TV Network and quickly became a fan favorite. The series followed 12 young performers as they developed their unique skills with top stars and industry pros, who mentored them to stardom. The reality show distinguished itself by eliminating no one, offering incredible mentoring opportunities to all cast members throughout the season.

Over the course of 15 episodes, audiences were able to watch Woodard enhance his incredible strengths as a gospel singer with elements of rock, soul and pop. The young artist’s focus and skills deepened as he received advice, vocal coaching and performance tips from such industry insiders as Evan “Kidd” Bogart, Debra Byrd, Alex Larson and David “DQ” Quinones, as well as stars like Jordin Sparks, will.i.am, Colbie Caillat and Avril Lavigne. Barbara Cane, BMI Vice President, Writer/Publisher Relations and General Manager of the organization’s L.A. office, served as a judge for the finalists alongside other entertainment industry experts.

“We are thrilled for Michael, and congratulate him on his exciting win,” said BMI President & CEO Del Bryant. “The level of talent of all the show’s young performers was truly remarkable. BMI has a long tradition of supporting the early careers of promising songwriter/artists from Michael Jackson, Paul Simon and Brenda Lee, to today’s breakout stars including Taylor Swift, Lady Gaga, Miley Cyrus, Britney Spears, the Jonas Brothers, Miranda Lambert, Rihanna and so many more. We are looking forward to watching Michael develop as an artist and a writer over the course of a long and successful career.”

For more information on Michael Woodard and the entire cast of Majors and Minors, or to watch season highlights and complete episodes, visit mymajorsandminors.com.