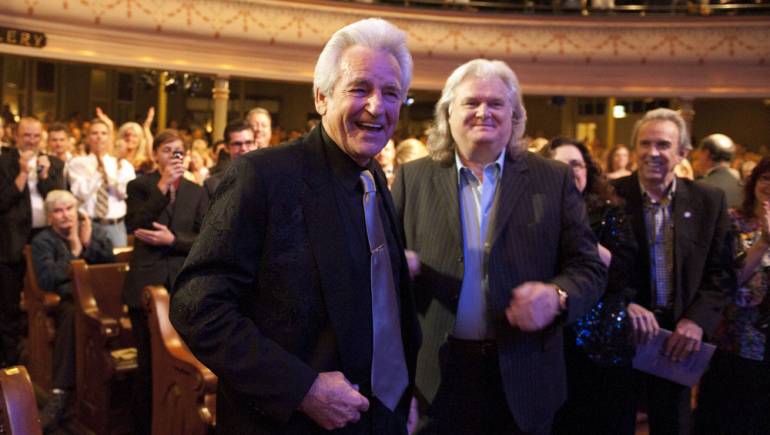 BMI legend Del McCoury makes his way to the stage during the 2011 IBMA Awards to be inducted into the Bluegrass Music Hall of Fame. Photo: Erika Goldring

The International Bluegrass Music Association Awards recognized the genre’s best on Thursday, September 29 at the historic Ryman Auditorium in Nashville.

From Bill Monroe to Flatt and Scruggs, bluegrass’s deepest roots are intertwined with the BMI story. The 2011 IBMA Awards celebrated that history and today’s torch-bearers, as BMI legends, current leaders, and new voices shared the stage, winning the overwhelming majority of the evening’s trophies.

Beloved pioneer Del McCoury was inducted into the Bluegrass Music Hall of Fame. McCoury’s trip to the stage prompted a standing ovation from the packed auditorium.

The Boxcars earned two awards, Instrumental Group and Emerging Artist of the Year, both of which underscore the magnitude of the band’s ascent. Member Ron Stewart garnered an individual win for Banjo Player of the Year, tying with the Grascals’ Kristin Scott Benson.

The Gibson Brothers also enjoyed a big night. In addition to Vocal Group of the Year, the band walked away with the Album of the Year trophy thanks to Help My Brother.

“Prayer Bells of Heaven“ earned a pair of honors for its power trio J.D. Crowe, Doyle Lawson, and Paul Williams: Recorded Event and Gospel Recorded Performance of the Year. Balsam Range’s “Trains I Missed” claimed Song of the Year honors for the band as well as the tune’s co-writer Nicole Witt.

Vocal Group of the Year
The Gibson Brothers

Instrumental Group of the Year
The Boxcars

Emerging Artist of the Year
The Boxcars