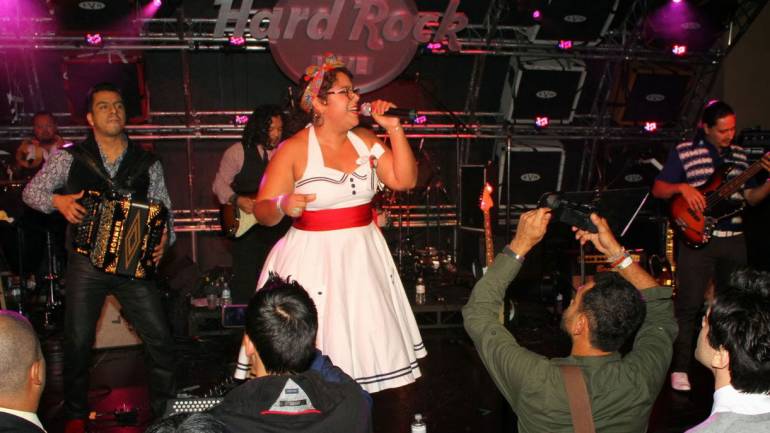 As in the past, these top-notch singer-songwriters treated the crowd to a variety of ‘80s-era pop, rock and soul covers, all while putting their own unique spin on them, such as the salsa rendition of Guns N’ Roses’ “Sweet Child of Mine” by Mojito Lite, Gian Marco’s take on Sting’s “Roxanne” on ukulele and Bomba Estereo’s Spanglish remix of Technotronic’s “Pump Up the Jam.” Other beloved classics covered included Prince’s “Kiss,” Michael Jackson’s “Rock With You,” Simple Minds’ “Don’t You Forget About Me,” Tears for Fears’ “Everybody Wants to Rule The World,” Rick James’ “Superfreak” and Roberta Flack’s “Killing Me Softly.” La Santa Cecilia closed out the night with an accordion-laced medley.

“We’re just a bunch of friends who met in the industry and wanted to give back. This event is special every year. We have a great lineup, great music, and we’re here to raise funds for Education Through Music. It’s always nice to take a week like this and give it a different meaning,” said Sebastian Krys of Los Producers.

This year’s benefiting charity is ETMLA, which promotes and provides music in disadvantaged schools as part of the core curriculum in order to enhance students’ academic achievement and overall development. ETMLA partners with low-income area elementary and middle schools that lack the resources for a school-wide music program and collaborates with school and district leaders to customize a high quality, sequential music program that serves every child for the entire year.

Those who were not present the night of November 20 and would like to participate in the online auction benefiting ETMLA have a unique opportunity through December 2 to contribute to this great cause by visiting: http://www.biddingforgood.com/etmla.