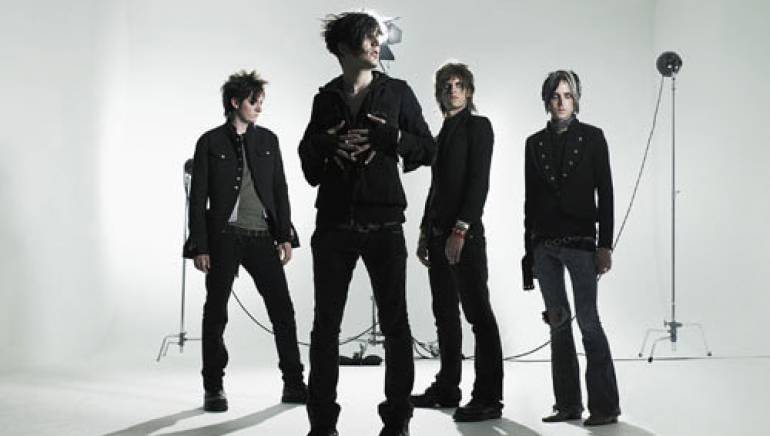 “And I’m not running anymore, I’ll stand to face it all, I’ll fight for every breath/Until there’s nothing left of us“

A title could not be more apropos. Until There’s Nothing Left of Us, the latest offering from Kill Hannah, defines the blue-collar work ethic of this unique band, whose American spin on British modern rock reaches its apotheosis on their sensational new release.

After touring relentlessly through the two years that followed their 2003 Atlantic debut, For Never & Ever (which featured the smash single “Kennedy”), the band dedicated six months to conceptualizing their sophomore effort with intense songwriting and constant demoing. After having a lifetime to write their first album, it was, admittedly, a challenge. But they’ve beaten the odds before.

No one sounded or looked like them when they first broke free from their art school roots, peddled their independently produced records at shows and local stores, conquered skeptics and built a loyal fan base. Their sound had no precedent in their hometown of Chicago, yet its influence would launch a subculture there and spread far beyond to others that would follow their musical and visual leads. Back then, they had a ferocious DIY-mentality, creating their own merchandise, passing out fliers in the snow, maintaining their heavily trafficked website and more. They still do.

With the final mixes for Until There’s Nothing Left of Us, they knew they had given all they had to this music.

And you can hear it - in the passion and poetry, the candor of their lyrics, the physical impact of their beats … all the elements that prompted Billy Corgan to hail them as “the future of Chicago rock” resonate here. Easily described as the bridge between the Killers, AFI, Fall Out Boy and My Chemical Romance, this band owns John Hughes movies, worn out mix tapes and a comprehensive understanding of what came before them. Their sound is at once familiar and refreshingly original, showing undeniable growth by taking chances in a world where most art is being played safe.

While Kill Hannah had cut Forever Never & Ever far from home in sunny Los Angeles, Until There’s Nothing Left of Us was conceived and created back home in Chicago during the dead of winter. That, according to Devine, stamps every second of the album with a distinctive energy.

“Everything came from the stimulation I get from this place,” he insists. “I live in view of the entire skyline; the trains literally circle me. It’s almost like the city itself envelops me. Like any metropolis, it can be dark at times, but super romantic too. From nine to five, it’s absolute chaos, and then after six o’clock it’s completely desolate. At the lakeshore it might be totally placid and serene, and in the next minute these crazy waves crash in and freeze as massive piles of jagged ice. In a way, our music is like that too. From track to track on this record, and even within each song, we have moments of triumph and then we have moments of creepy romance.”

As the countdown for delivering Until There’s Nothing Left of Us began, Devine set off alone, exploring his city and finding magic in places that had somehow escaped his attention – a tiny Gothic church, for example, amidst the towers that loom over Michigan Avenue. Each detail stirred ideas – word paintings, a snippet of melody – that he’d record on his voicemail.

Soon the band gathered at friend/local drummer Garrett Hammond’s home studio and began taking all of their demos apart. “We’d rehearse and develop and record every single part,” recalls guitarist Dan Wiese. “Every note and every word got re-evaluated several times before everyone was satisfied.”

After wrapping up their intense pre-production, they hit the studio with Chicago native Johnny K. With a catalog that includes producing bands like Disturbed and 3 Doors Down, he seemed like an unusual choice for Kill Hannah. “But we wanted to experiment,” Devine explains. “My personal tastes lean toward European and 80s influences, and Johnny is known for doing straight-ahead rock or metal. In Chicago terms, it’s like we’re North Side and Johnny is, as he calls himself, a ‘South Side knucklehead’.” It was, of course, a perfect match.

They began by finding common ground as Johnny seconded their enthusiasm for the Cure, Peter Gabriel and the Psychedelic Furs. The plan, then, was to at once expand and refine their sound without losing the primal instincts that have driven Kill Hannah from the start.

“We love our first album and stand by it, but we also know that the most consistent criticism it received was that it didn’t have the raw energy that we have when we play live,” Devine says. “On the new album, we’ve got the harmonized vocals and electronics and sophistication that are so much a part of what we are, but Johnny’s perspective helped us to also bring that dynamic side of our show to the table too.”

If you’re lucky enough to have seen them live on tours with the Sounds and H.I.M., or headlining their now legendary shows at the Metro and across the country this summer, you’ll know immediately what all of this means.

From the album’s triumphant, instrumental opening, “Life in the Arctic,” which defines the context for the epic tracks that follow, through the siren-like riff that drives “Believer,” the drum and bass-inspired beats and delicate chimes that surge into waves of massive guitars on “The Songs That Saved My Life,” the seductive blend of emotive melody and body-slamming beat on the anthemic, lead single “Lips Like Morphine,” whose chorus fans began chanting at shows within days of the song’s appearance on the band’s MySpace page (myspace.com/killhannah). This is how Kill Hannah sounds onstage when they play with a strength only achieved by feeding from the energy of their fans and serving it back with immeasurable intensity.

Mat Devine’s lyrics for “Love You to Death” reflect his familiarity with that place where tragedy and romance unite, a Shakespearean vision that’s conveyed powerfully in classic pop song format. “Scream” pays tribute to their hometown, whose grandeur and intensity are critical elements of Kill Hannah’s style. And “Sleep Tight,” improbably intimate, provides the perfect coda.

Until There’s Nothing Left of Us is everything that the band and the legions that follow them could have wished for. But it’s only the start of the next exciting chapter for Kill Hannah.