Posted in MusicWorld on January 6, 2011 by Lisa Zhito 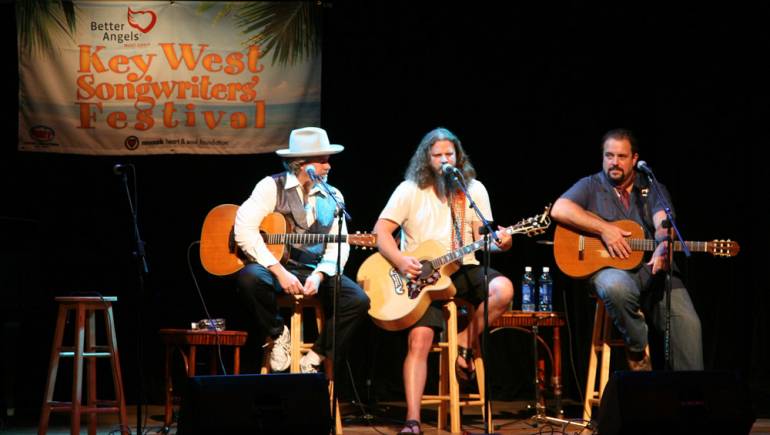 One week every spring for the past 15 years, Key West has transformed itself into the nation’s best listening room. The Better Angels Music Key West Songwriters Festival brings top songwriters and thousands of fans from around the world to this southernmost tip of the continental United States, where once a year, flip-flops and frozen concoctions complement a laid-back music mecca.

BMI has been a sponsor of the event since its second year. Mark Mason, BMI Senior Director of Writer/Publisher Relations and the event’s premiere industry booster, calls the festival “a great marriage of people and place.

“The Key West Songwriters Festival is one of a kind—there’s really nothing else like it,” Mason says. “The people in Key West love the songwriters and they go out of their way to make the festival happen and to be accommodating.”

Perhaps that’s because the event was launched by an admitted songwriters’ fan. Charlie Bauer came to Key West in 1988 to open the Hog’s Breath Saloon.

“I like people who perform their own songs and write their own songs,” he says. “We had three shows a day at the Hog’s Breath, and our performers were all performing songwriters.”

Songwriter Drew Reid first suggested a writers festival, Bauer recalls, and he immediately jumped at the idea. The event’s 1995 debut was small but memorable, featuring Mickey Newbury and Shel Silverstein.

“1996 was the first year BMI got involved,” Mason recalls. “In 15 years, the festival has grown from just a handful of songwriter sets to more than 170 BMI songwriters performing at more than 30 shows around the island.”

The list of writers appearing on the festival’s many stages these days is a veritable who’s who of hitmakers. That in itself is a draw for writers, says Dallas Davidson, who has attended for the past six years.

“One main reason I go is that all of my best friends go down there,” he says. “Jamey Johnson, Randy Houser, Jerrod Niemann, Rob Hatch – we were all big buddies before those guys started taking off, and they’re all on the road now. About the only time we know we’re all going to be together and get to play a show like we used to is down in Key West.”

“There’s a lot of music festivals but there are very few just songwriter deals,” agrees Robert Earl Keen. “Believe it or not, when you go down there and you’re a songwriter and you run into a bunch of folks–whether you know ‘em or you don’t know ‘em–you all of a sudden feel like, oh, I’m at home! You can seriously have a good discussion about writing songs with other people, which is not what you always find in a room full of musicians.”

Chuck Cannon has participated in the event since the 1990s, and that camaraderie is a big reason why. “There’s a lot of down time, so we get to hang out and get to know each other in a way that’s not sitting in a room and trying to make up a song.

Cannon’s favorite moments are those festival attendees don’t see, after everyone else has turned in and a guitar—and maybe a bottle—are passed around. Cannon recalls one such night in a room above the BottleCap Lounge.

“Hugh Prestwood and I were walking home at 7 a.m. the next morning and he turned to me and said, ‘Do you realize if a bomb would have gone off how many hit songs would have been lost?’ Of all my musical memories, I would have to say that night is the dearest to me.”