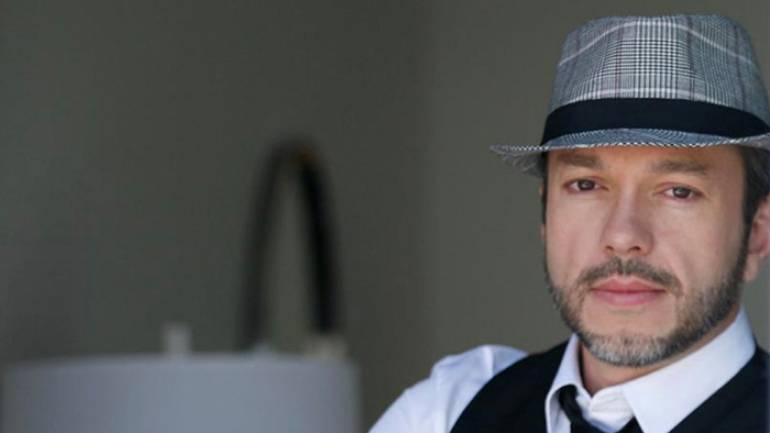 A third-generation songwriter from an acclaimed musical family, Edgar Cortázar has lived a life devoted to creating, collaborating and sharing the power of music. The grandson of legendary Mexican songwriter Ernesto Cortázar and the son of renowned film composer/songwriter Ernesto Cortázar Ducker, the young Edgar Cortázar was introduced to the family business at an early age, initially assisting with his father’s scores, but soon developing distinctive lyrical and vocal styles that were singularly his own.

Since then, he has gone on to become a prolific songwriter and collaborator, working with luminaries from within the world of Latin music and beyond. Taking his passion for spreading the power of music a step further, Cortázar became a preeminent Spanish lyric adaptor, helping bridge the divide between Anglo and Spanish-speaking markets, all in the name of establishing an exchange of ideas, art, culture and tradition.

BMI caught up with Cortázar in honor of Hispanic Heritage Month to find out what fuels his great love for making and sharing music. Here’s what he had to say.

You come from a family with an incomparably rich musical history. When did you know you were going to follow that same path and what does it mean to you to continue your family legacy?

Music has always been present in my life. Since I was a little kid, my father, Ernesto Cortázar, played the piano every day and filled the walls of our home with his compositions.

He would also rehearse his night club piano show in which he sang Latin classics like “No Volveré” and “Serenata Tapatía,” written by his father—my grandfather—plus standard songs and boleros of all kinds.

This made me enjoy music constantly and decide that I wanted to continue the Cortázar legacy of songwriting at the age of 15, when I started helping my dad score music for films like Santa Sangre, directed by Alejandro Jodorowsky.

It’s been one of my greatest honors to continue my family legacy of songwriting because music is eternal, and there’s no better feeling than knowing your art can reach hearts and souls of all ages and ethnicities through the power of music.

Your versatility as a Spanish lyric adaptor has made you an invaluable asset. How did you get started with that?

I started my alternate music career as a Spanish lyric adaptor around my thirties when my great friend and colleague Mark Portmann and I decided to create a production company named Make Hits Spanish.

Our goal was writing Spanish lyric adaptations of all the hits that Anglo artists charted. We had great success working for companies like Disney and Nickelodeon where we had the chance to produce, record and adapt Spanish versions of songs from superstars like Demi Lovato, Selena Gomez, Ariana Grande, Phil Collins, Diane Warren, Black Eyed Peas and IL Volo, just to name a few. We were also able to collaborate with people like Humberto Gatica, Bernie Taupin, Tony Renis, Jorge Calandrelli, Armando Manzanero, Kike Santander and many more.

The creative process of adapting English lyrics to Spanish ones starts with the lyrical adjustment of the message each song has from one language to the other. Making the main idea expressed in each English song reach a new audience in the Latin world is very important.

Cultures vary and the main objective is making the audience understand this new version in their own language while hearing the same syllable enunciation through the voice of the artist they love.

During the vocal recording of each song, Mark Portmann and I helped each artist achieve the best interpretation of this new version through a special and unique vocal coaching process that makes them lose the Anglo accent and sound like a Latin singer.

What does Hispanic Heritage Month mean to you?

HISPANIC HERITAGE means a lot to me!

It’s a strong pair of words that bring the feeling of pride to me as a Mexican songwriter that has surpassed cultural frontiers through the power of music.

My son Fausto is now doing his part becoming the fourth generation of songwriters in my family and I cannot be more proud to know that he will become a BMI member this month at age 16! He is songwriting in both English and Spanish languages in order to maintain and express his Spanish heritage worldwide with the same pride and honor.

Your singing style is quite unique. How did this develop?

I started taking singing classes at 16, and my teacher showed me the classical technique but also combined pop music as a part of her method. This gave me the chance to create a distinctive vibrato which identified me during auditions that led me to find vocal work for big companies like Disney, Chevrolet, Televisa & many more.

As a songwriter, I also developed the ability of recording my own demos as a vocalist and this helped me to save money and present my songs to different artists, even copycatting their style so they would feel the lyrics even more personally.

You have been nominated for and won multiple GRAMMYs and Latin GRAMMYs for your work and enjoy a wide array of industry accolades. What accomplishment are you most proud of?

I am proud of every song that any artist has picked from my catalog to become part of theirs. I think that is the most important award ever.

As a personal note, my biggest achievement as a songwriter has been able to hear my creations in the voices of artists like Luis Miguel, Olga Tañón, IL Volo, Cristian Castro, Conjunto Primavera, Montez de Durango, Pedro Fernandez, Selena Gomez, Ariana Grande, J. Balvin, Black Eyed Peas and many, many more, fulfilling my dream of reaching all types of markets: Pop, Regional Mexican, Tropical, Urban, Classical plus crossing over to the English / International music spectrum.

BMI has been my biggest ally during my songwriting career. I cannot express the gratitude to all the BMI executives that have supported my music during more than 25 years. It’s been a beautiful experience to be part of this wonderful composer society since the beginning of my career and I can’t wait to see what the future will bring!