Posted in MusicWorld on July 16, 2007 by Lorie Hollabaugh 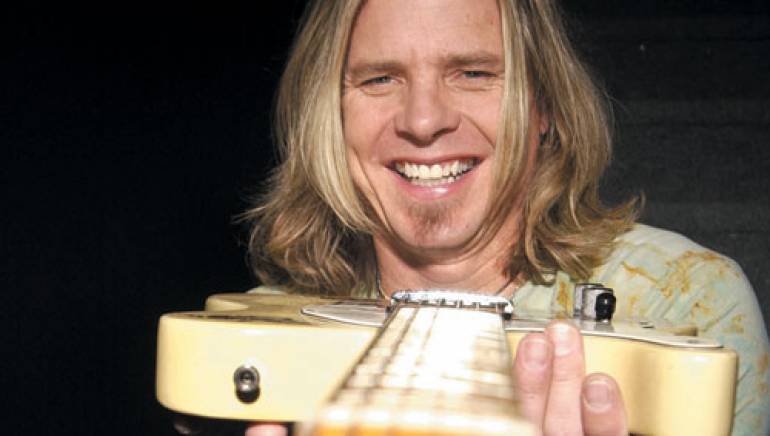 If Jeffrey Steele wanted to give up life as an ultra-successful songwriter for a different career, he could definitely become a private eye. The writer of hits like “What Hurts The Most” and “My Town,” he has spent his entire life observing people’s behavior, then logging it mentally for future reference. And that unfailing attention to detail has helped Steele bring to life hundreds of colorful characters and interesting stories that have been distilled into dozens of rich, three-minute slices of life.

“I think all songwriters are observers,” says Steele. “My favorite part of playing is hearing people tell me their stories afterward. It’s important to be a listener, and I keep all of it logged in my head. As a writer, you’ve got to be observant and learn to back off and look at the other angles. I have this really visual brain, and if I read something, or talk to somebody, I always remember it.”

Steele has had a love affair with words pretty much all his life, and he still lives for that exact moment when he completes a song. “I’m a real word freak — the word has to be the right word when I write. I really still have that passion for when words fall the right way… . I love when things get twisted, and turned, and somehow they come out right, and you find a new way to say an old cliché.”

An imaginative, gifted kid who found school a bit too restricting, Steele started writing early. “I was terrible in school. I was a smart kid with a supposedly high IQ, but if I questioned the teacher or had an opinion outside of what they were teaching, I would always get scolded for it. And it kind of drove me out of school. But I liked to write songs.”

Forming country band Boy Howdy in 1990, Steele enjoyed success with hits like “She’d Give Anything” but decided to try Nashville solo in 1994. He weathered several label deals and continued to write songs, with minor success at first. But he never forgot those early days playing around Riverside, or the plentiful characters he met back then. And when he hit a writing slump around 1997, he turned to his past for inspiration. “I spent 20 years playing bars all over and you meet so many different characters. So I asked myself why aren’t you writing about that? And I started to look at stuff with my father that had been left unsaid and undone, and there were all these little moments of time that I wasn’t even looking at in my life. So I finally realized I should draw off of all that and use it.”

He also stopped worrying about pleasing the masses and got back to the basics. “I decided I was just going to write what I needed to write and not worry about the paycheck. And I found the old proverb to be true: ‘Dumb it down and it will be profound.’ The simpler you make it, the more profound you can be.”

Letting go proved to be the ticket for Steele, who began scoring hits right and left with “The Cowboy In Me,” “Chrome,” “Speed” and others. Named BMI’s Songwriter of the Year in 2003, he was tapped to produce albums by Montgomery Gentry and Keith Anderson. In 2005, when Rascal Flatts cut “What Hurts The Most,” Steele had no idea just how strongly people would identify with those lyrics he had chiseled out in London years earlier. Written about his father, Steele had retooled the song as a love song and honestly thought it would be a pop cut. It skyrocketed to the top of the country and A/C charts for multiple weeks, and received ACM and Grammy nominations.

“I left home early to chase dreams and left a lot of strings untied and there were a lot of things I didn’t do with my old man before he passed away. He was sick near the end and I didn’t get back until the very end and there was a lot of sadness … but I know he wanted me to be out there. And he didn’t let on he was as sick as he was because he didn’t want me stopping. So that song was about that.”

Though thrilled with the song’s reception, Steele still feels he’s chasing that benchmark tune, his “Angel Flying Too Close To The Ground,” or “Sunday Morning Coming Down,” or “Still Haven’t Found What I’m Looking For.” “If I can ever get a song anywhere near that league that will hang around that long and still be valid, then I think I’d feel like ‘yeah, this was worth every failure, every sacrifice, every tradeoff, every compromise, every sticking to your guns, maybe it was worth it.’ Whatever kind of importance is drawn to my songs and what I do, if the lyrics hold up and it still affects people in 20 years, I’m happy.”