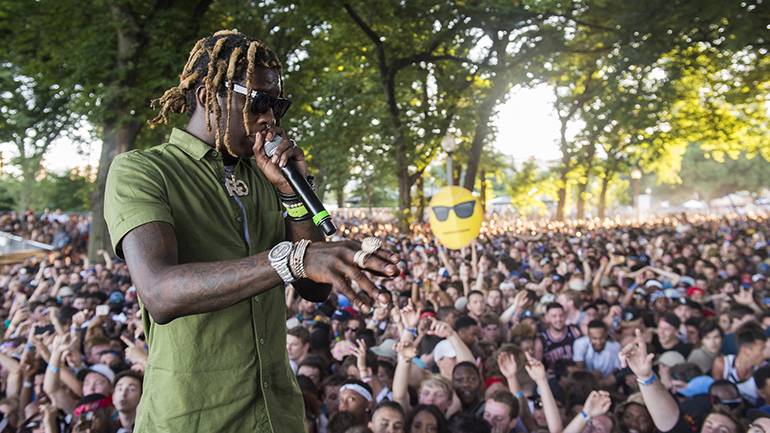 Born Jeffery Williams, the Atlanta rapper now known as Young Thug first performed on the BMI stage at Lollapalooza in 2015. The years leading up to his performance were spent perfecting his rap skills and releasing mixtapes and EPs, eventually catching Gucci Mane’s attention for the release of 1017 Thug. Now a superstar in his own right (and with an extensive catalog to prove it), Young Thug has had nine albums on the Billboard 200, 52 songs on the Hot 100 (including the #1 “Havana” with Camila Cabello), and a Song of the Year GRAMMY win for co-writing Childish Gambino’s “This is America.” With his distinctive sound and chameleonic style, Young Thug has hopped on tracks by Gunna, Trippie Redd, Nicki Minaj, 2 Chainz, and Future, and the hit single, “The London” with J. Cole and Travis Scott, earned him another GRAMMY nomination in 2020. Earlier this year, he dropped a genre-bending guest feature on Diplo’s country project, Thomas Wesley, alongside country superstar, Thomas Rhett. Young Thug’s most recent album, a joint project with Chris Brown called Slime & B, dropped in May, and contains the current hit single, “Go Crazy.”