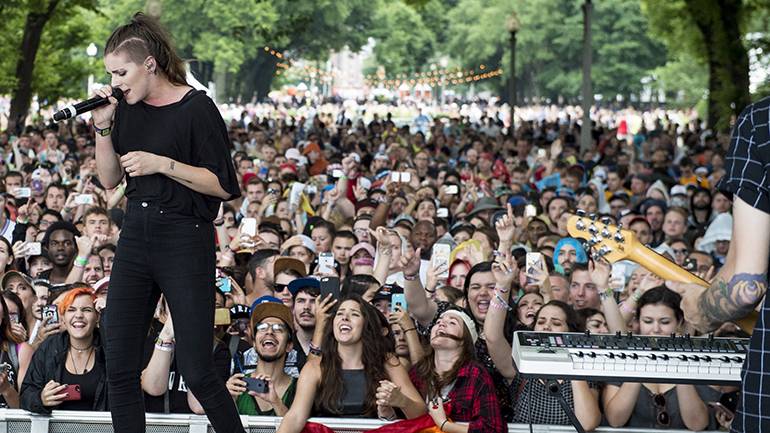 PVRIS (pronounced “Paris”) is an electro-pop trio known for their dark, haunting sound and unapologetic honesty. Frontwoman Lynn Gunn’s powerhouse vocals fit perfectly with the group’s signature synthesizers, and their debut on the BMI stage at Lollapalooza took place in 2016. Within the last four years, PVRIS has crossed milestone after milestone, touring with Fall Out Boy, Muse, and 30 Seconds to Mars, selling out London’s O2 Academy, and winning two Rock Sound Awards (2017 Artist of the Year and 2018 Rock Sound Icon) and an AltRock Award (Best Tour of the Year). Their first full-length studio album, White Noise, was released in 2014, and a deluxe version featuring additional tracks was reissued in 2016. All We Know of Heaven, All We Need of Hell, was made available in 2017 and marked their second appearance on the Billboard 200. Notably, Billboard ranked the project as one of the best albums of 2017, and they were described by Q Magazine as connecting the dots between The Cure, Chvrches, and Florence + the Machine. Earlier this year, PVRIS released an acoustic version of their 2019 single, “Hallucinations,” as well as the songs, “Dead Weight” and “Gimme a Minute.” Their latest track, a collaboration with guardin called “alive” dropped at the end of June.