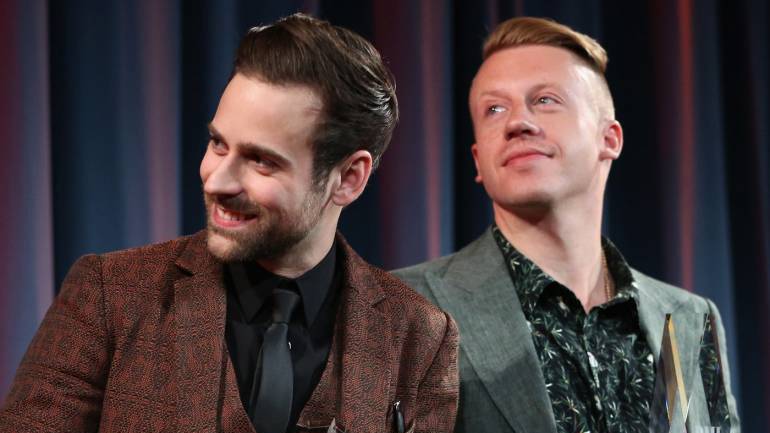 Macklemore & Ryan Lewis are a rapping and producing pair who first appeared in the BMI Indie Spotlight in 2011. At the time, they had just gotten together to work on Macklemore’s The Vs. projects, which began a journey that led them straight to the top of the charts. In 2012, they released The Heist, a collection of 18 tracks that debuted at #2 on the Billboard 200 and at #1 on the Billboard Top R&B/Hip-Hop Albums chart. The now-platinum record features the Billboard Hot 100 chart toppers “Can’t Hold Us” (RIAA certified 6X platinum) and “Thrift Shop” (RIAA certified diamond), the LGBTQIA+ anthem, “Same Love” (RIAA certified triple platinum), and other standouts like “Wings” and “White Walls.” The Heist won the GRAMMY for Best Rap Album in 2014 and led to a successful world tour. In 2016, the duo’s next and final (for now) project, The Unruly Mess I’ve Made, peaked at #4 on the Billboard 200 and at #1 on the Billboard Top R&B/Hip-Hop Albums chart. While the LP marked their last collaboration before their hiatus, they continue to work on music individually; Macklemore’s solo album, GEMINI, was released in 2017 and he has released several singles over the years, including “Summer Days,” “I Don’t Belong In This Club,” “Shadow,” and “These Days” with Rudimental, Jess Glynne, and Dan Caplen. Meanwhile, Lewis continues working on music behind the scenes, co-writing and producing for Kesha (“Praying”) and Hobo Johnson (“Subaru Crosstek XV”).