Posted in MusicWorld on August 18, 2016 by Cliff Goldmacher 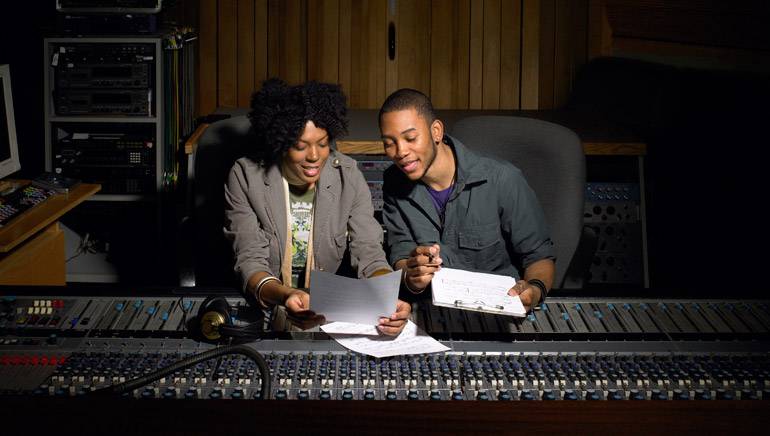 For songwriters getting ready to demo a song, it’s essential that you choose a professional recording studio with qualified personnel. However, if you haven’t spent much time in the studio, it can be tough to know what distinguishes true professionals from amateurs. As a second part to my article on demo singers, I’m going to delve into the specifics of what you can expect from top-notch studio pros, beginning with the engineer and moving on to the producer and finally the session musicians themselves.

The Engineer
A studio engineer, by definition, is the individual directly responsible for the nuts and bolts of the recording process.This can be anything from setting up the microphones to running the recording software on the studio’s computer. It’s essential that an engineer have an intimate knowledge of the studio’s gear and a full understanding of the technology involved. Another critical element is that the gear itself must be in good working order and reproduce quality sound. This is a constant battle as studio gear can be both delicate and finicky. That being said, it’s up to the engineer to make certain that everything is functioning well before each session so that valuable time isn’t wasted chasing down any technical issues. On top of this, a quality engineer is also capable of anticipating what’s coming next in a session so that you and any other studio personnel like the producer, players or vocalist aren’t stuck waiting around as the engineer prepares for the next item on the recording agenda. The trademark of a pro engineer is that the session runs so smoothly that you don’t notice how much is being taken care of to make it happen. It’s also often the case that the studio session’s engineer is also the producer.

The Producer
The hallmark of a professional producer is experience. It’s this familiarity with the studio and the recording process that allows a producer to help guide songwriters with less studio experience through the song demo process. This shows up first in pre-production, where a producer will take time in advance of the session to answer any and all questions, discuss song arrangement ideas and even make singer and player recommendations based on their relationships and knowledge of a given musical genre. Regarding arrangements, producers can also help their clients stay away from clichéd or cookie cutter ideas that will end up sounding either dated over time or otherwise undermine a good song with a lackluster recording. Beyond the pre-production work and hiring of the appropriate players and singers, a producer is there to make sure that the actual session runs smoothly. This can mean everything from translating your musical requests into language that the demo singer and session musicians can understand to the actual hands-on engineering of the session to get the appropriate sound. Think of a professional producer as your in-studio recording and arranging expert whom you can rely on to make certain that your recording - and your overall studio experience - is top notch. A final, more subtle element that an experienced producer adds is the overall atmosphere of a session. A professional producer not only makes sure the work is being done properly but also keeps the mood light and relaxed. This is more than just a luxury, as I’ve observed countless times that everyone involved does better work when the atmosphere isn’t strained or uncomfortable.

Session Musicians
One of the most important things to remember about studio musicians is that their skill set is tailored to the recording studio. A great live musician isn’t necessarily a great studio musician. I’ve often referred to the recording process as music surgery because of the finesse and skill it takes to make dynamic, emotional and compelling recordings in an unnatural musical environment. Instead of being on stage where there is a direct connection with the audience, studio musicians are capable of going into a small booth, putting on headphones, listening to a clicking sound and THEN giving that same dynamic, emotional, compelling - and mistake free - performance time after time. Not only is it their consistency that sets them apart but also the best studio musicians are also the best listeners. This means that while they’re playing they’re also listening to what the vocalist is doing and are careful to play in a way that will support - and not conflict with - that vocal performance. These musicians - often after decades of practice - have total command of their instruments, giving them options for chord voicings, tone and effects that can make all the difference in bringing a recording to life. While my recommendation is to always let the session musicians try it their way first when recording your song, the mark of true professionals is that if you have a specific request, they’re always happy to try it for you. Professional session musicians understand that music is a subjective medium and if you’re not hearing what you’re listening for, they’re not doing their jobs properly.

In my opinion, it’s too easy to buy recording gear these days and call yourself a studio. My intention with this article is to make sure that the bar is set high enough that songwriters don’t find themselves settling for a semi-pro or amateurish studio experience. Investing in a recording of your songs is a serious and not inexpensive endeavor. By making sure you’ve chosen genuine studio professionals, you’ll not only end up with a world-class recording but also with the stress-free and often thrilling experience of hearing top-notch musicians and singers playing your song.

You can download a FREE sample of Cliff’s eBook “The Songwriter’s Guide To Recording Professional Demos” by going to https://se295.infusionsoft.com/app/form/demo-ebook-sample

You can also watch Cliff’s songwriting instruction videos with a free trial at www.Lynda.com/CliffGoldmacher