Posted in MusicWorld on November 21, 2016 by Dave Simons 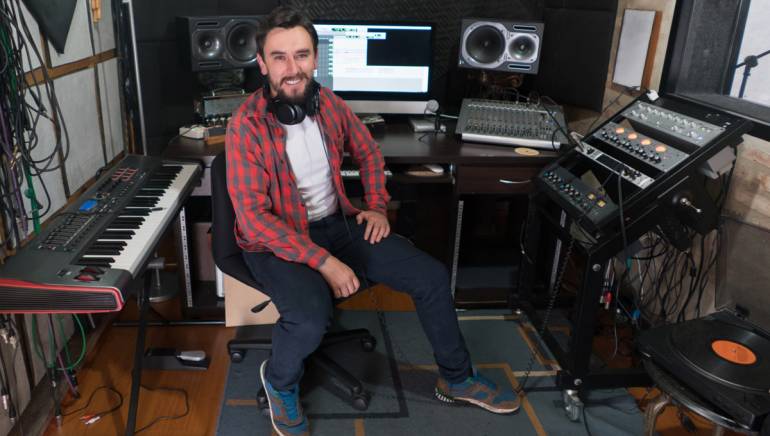 Over a decade ago in the pages of MusicWorld, I shared my experiences building a basic soundproofed recording space with attached control room. Since that time I’ve added a second, larger recording room, a live reverberation chamber as well as various other augmentations. Most of all, I’ve learned that home studio construction is essentially a work in progress—that is, through continual use I’ve been able to address many of the acoustical miscues I’d made during the initial building phase. That ability to tweak after the fact should give encouragement to anyone who aspires to create their own private recording empire.

Easier Than It Seems

First of all, there’s really nothing all that fancy about studio construction – basic materials consist mainly of lumber, drywall and sound-insulating board, making it a relatively affordable proposition, assuming you can handle most of the labor on a DIY basis.

Before you start sawing away, there are a few key rules of thumb to follow. First, a purpose-built studio should ideally be a room within a room – that is, no part of the room should come in direct contact with the main structure of the building. Additionally, the walls of the studio should be slightly askew in order to prevent dreaded bouncing soundwaves – which, if you’re a novice builder like me, should be no problem at all (I still can’t erect a perfectly straight wall if I tried).

The first order of business is choosing the right spot. Generally speaking, basements work well for a number of reasons—for one thing, sounds produced underground are less prone to leakage, not to mention that a basement space offers a respite from the heat during the summer months. Additionally, basements often have a bulkhead for easy outside access. On the other hand basements are prone to dampness, making it essential to run a de-humidifier in order to protect the rooms and equipment from excess moisture. If a subterranean space isn’t in the cards, a corner room or other non-adjoining spot will do.

Size is also a consideration. A larger room may be desirable particularly if you have lots of equipment or work with multiple players; additionally, the bigger the area, the “livelier” the recorded sound tends to be. Bear in mind, however, that the more square footage you have, the more building material you’ll need. And while a 14 x 20 room may resonate more than one that’s only 10 x 13, the extra volume makes it more challenging to soundproof.

When putting up a studio wall frame, remember the room-within-a-room principle – that is, rather than fastening the top plate of the frame directly to the joists, use insulating foam in between as well as rubber spacers at each contact point to help keep sound from being transferred throughout the building (a layer of foam should be placed underneath the bottom plate as well).

The same sound-stopping strategy is applied to the construction of the wall frame. Whereas standard house framing calls for a 2x4 stud fastened every 16 inches along a 2x4 plate (i.e., “16 on center”), the special studio stud system uses the same 2x4 plate but substitutes 2x3 studs every 12 inches, with each alternating stud fastened at opposite sides of the plate. That way the interior and exterior walls can be attached independent of one another, again making it more difficult for sound to pass through to the outside.

The walls themselves are comprised of fiber-based “soundboard” on the inside and ceiling, as well as a layer of gypsum board or drywall (aka “sheetrock”) attached behind the soundboard ceiling as well as the exterior wall frame. You’ll want to use R-11 fiberglass insulation loosely stuffed between interior/exterior walls and above the ceiling to further thwart sound leakage (as well as to keep the room temperate). There are several variations on the wall-composition formula, such as putting an additional layer of sheetrock behind the interior soundboard wall, or, for a really nice blend of tone, looks and sound-stoppage, using pine boards instead of soundboard over a sub-layer of sheetrock. Bottom line – the more layers you have, the more soundproofed your room is likely to be.

Being frugal usually compels me to tackle as many tasks as possible without seeking professional assistance. However, there are a few jobs that are often best left for fully licensed pros—such as when it comes to adding wiring during the walling up phase. Generally speaking, 2-3 outlet boxes per medium-sized or smaller space will be sufficient; however, when building my large room several years ago I attached a box every six feet, or enough to handle a whole roomful of amps. Ensure that all boxes are mounted flush against the wall in order to prevent sound from leaking through. Though they cost a bit more, “surface-mount” outlet boxes, such as those made by the Wiremold company, are perfect for studio rooms since they attach directly to the wall and therefore only require a hole big enough for a single strand of connecting wire to pass through, unlike standard recessed outlets.

A few other jobs that will likely require an extra set of hands include:

Installing a double-layered glass window between control room and main recording room. Assuming you’re doing a double room, you’ll want to include a cutout at the appropriate height on the dividing wall for inserting a double-layer of studio glass. However, you can always choose to bypass the glass by simply installing a basic camera/monitor with intercom system between the two rooms.

Hanging sound-stopping interior and exterior doors. Your best bet is to use a pre-hung metal door, which is not only easier on the wallet but, since the doorframe comes attached, is relatively simple to install. Additionally, pre-hung doors include a form-fitting seal which makes them surprisingly good sound-stoppers. You just have to build a rough opening, then make sure your door is level before fastening it to the main frame.

Though not quite the same as a purpose-built studio, one can always retrofit an existing room by applying some of the same acoustical and soundproofing concepts referenced above. If possible, start by choosing a room with asymmetrical walls or one that includes an alcove or other kind of offset in order to avoid bouncing soundwaves. Using strategically placed sound-absorbing material such as throw rugs for the floors as well as packing blankets or acoustical foam attached to the walls not only helps “tune” the room, but also keeps sound from traveling outside (since the fewer interior vibrations there are, the quieter the room will be). Not that you necessarily want the room to be one big sponge—without any reflections at all, acoustic instruments like guitars and drums could wind up sounding flat and lifeless (ditto for vocals). Thus, one of the primary tenets of studio acoustics is to have combinations of soft and hard surfaces working in tandem, such as applying some sound-absorbing material to one wall, while leaving the opposite wall reflective.

To further address random acoustic issues, simply try moving stuff around in the room—or, better yet, fill up the space with additional stuff. My large room initially had a subtle yet annoying echo right in the center until the day I brought home a used couch from the Salvation Army and stuck it against the far wall–suddenly, no more echo.

In short, experimentation is key when striking a balance between absorption and warmth…and everything else that goes into both building a studio and recording in it.