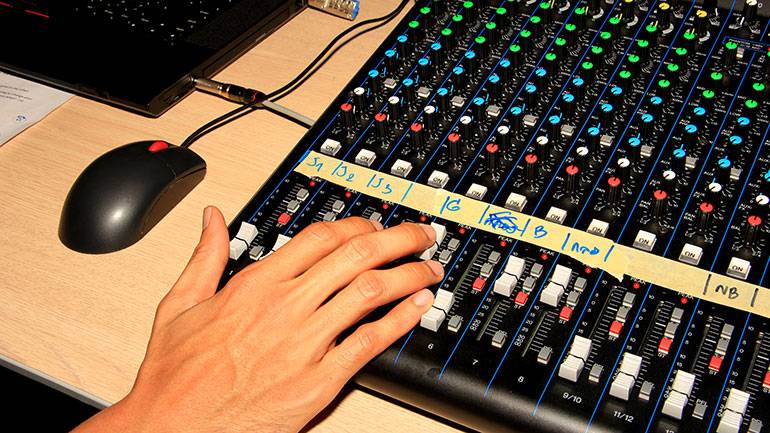 While most folks have no problem pointing and clicking their way through a computer-based recording project, there are still those who prefer a fistful of real faders to a wrist-twisting mouse. Here, we look at some newer solutions for those tactile types, including “hybrid” mix consoles that capture the aesthetic and workflow of old analog boards, while also serving as a spacious interface for DAW-based software.

As in other industries, over the years technology has dramatically reduced the amount of real estate needed to make a record—what once called for a locker room of gear can now be had on a laptop. Along the way, the massive analog mixing consoles of yesterday gradually fell out of favor and, analog diehards notwithstanding, seemed destined for obsolescence, their footprint too large for today’s increasingly micro environment.

While acknowledging the efficiency of recording software, plug-ins and the like, there remains a number of folks (myself included) who would rather avoid tracking with a mouse after spending an entire day working with one. Nor do they wish to waste any time dealing with a finicky vintage mixer—after all, the problem with old analog gear is that it’s, well, old and analog, and like cars or anything else with moving parts, is subject to natural deterioration. I should know, for despite having once written a book on the subject (Analog Recording, Backbeat Books), I’ll admit that the love I bestowed upon my various arcane mixers and recorders over the years went largely unrequited (one ‘80s console I recently owned literally exploded mid-session).

But in the same way vinyl records, cassette tapes and similar artifacts have found an appreciative new audience, today the gear market is suddenly teeming with both budget and boutique mics, processors and other peripherals based on decades-old analog protypes. As it so happens, mixers that use physical (as opposed to virtual) faders, as well as actual EQ, pan, aux and other controls are, apparently, also still very much in vogue. In recent times, a number of mainstay manufacturers such as Tascam, Zoom, Soundcraft and others have brought forth so-called “hybrid” consoles that capture the aesthetic and mechanics of those bygone boards, while also serving as a spacious interface for DAW-based software programs. And because many come with a generous helping of inputs/outputs as well as onboard effects processing, such units are often good candidates for live-sound applications as well.

One of the latest examples of this old-school-meets-new-school methodology is Tascam’s recently issued Model 24, a multi-purpose mix console that acts as a standalone 22-input, 24-track recorder (using a microSD card, rather than hard disc, as a storage facility) and, with its full complement of XLR/line-level connectors and wireless Bluetooth capability, can also handle a crowd of live players. Nor does the Model 24 cut out the digital domain—like many of its counterparts, data can be transferred as separate wave files to a computer via USB (or by exchanging the microSD card), allowing you to further refine and edit your tracks. For those who are already accustomed to working in a virtual environment, this ability to create your foundation tracks using hand-operated functionality can truly be a best-of-both-worlds proposition.

As an alternative to recording exclusively in-the-box, these multi-purpose physical mixers can be particularly instructive for entry level and/or younger users, whose DAWs incorporate the same basic workflow as their analog forebears (but which are hidden from view in submenus). With a quality mix surface, one is also afforded such luxuries as 100mm long-throw faders, color-coded pots for EQ, pans and gain controls, multiple effect send/returns, channel muting/soloing and more.

But there’s more to it than that. Of the myriad activities that only exist in the analog domain, one of the most intriguing is the technique known as “riding the faders”—named for the art of gradually raising and lowering individual channel levels during playback to accentuate solo passages, lead vocals, or even portions of the entire mix to create a subtle dynamic shift. There are other ways to have fun with faders as well. During one recent mix session, I decided I wanted an electric guitar going through a volume pedal—only I don’t own a volume pedal. Instead, I just recorded the guitar straight, then at mix time I carefully lifted the guitar’s track fader immediately following each strum, which allowed me to emulate the sound of an actual volume swell.

Of course, there are a number of things you can’t do with this kind of equipment. On the Model 24, for instance, all functionality is strictly analog, i.e., no motorized faders, midi-based synchronization, virtual-track stacking and so on. And because everything is literally done by hand, the result is that no two mixes will ever be completely alike. But for songwriters who’d rather focus on creating than computing, the simplicity and sheer visibility afforded by a good physical mixer may be well worth considering.