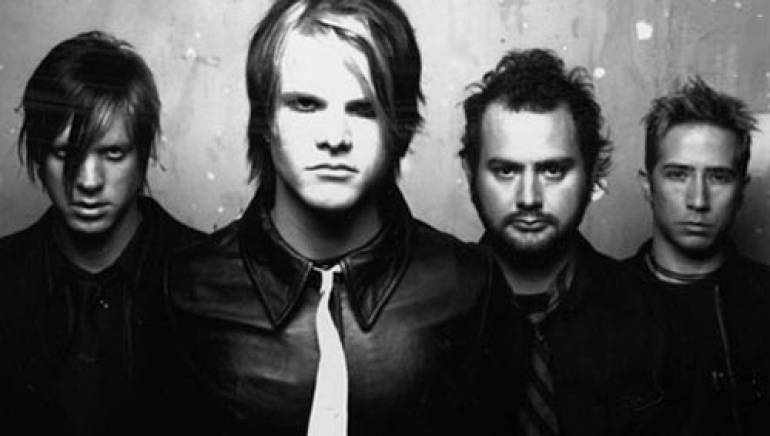 Some rock ‘n’ roll families snort up mountains of blow and fookin’ belittle each other in every interview. Some rock ‘n’ roll families outgrow their evangelical heritage and nail every aspiring model on either side of the Atlantic. Other rock ‘n’ roll families freak out when they share rehearsal space with former Spacehog members, blog extensively about their infatuation with other bands, and name their band after… we’re not going to divulge that just yet. God or Julie has plenty of time to emulate Oasis or Kings of Leon’s tabloid theatrics. For now, the modest Colorado transplants are preoccupied with wreaking sultry melodies, colossal walls of distortion, and indelible hooks.

It sounds like the beginning of a bad joke. Two blues brothers and their cousin, move to the Big Apple to make it as a hard rock band. But trust us, the punch line kicks ass. In their early high school years, J.P (Jon Paul), Adam and Aaron Johnson were obsessed with playing the blues, sneaking into Denver clubs, trading licks and downing shots with players four times their age. Networking paid fast dividends. One of their first gigs was opening for surf legend Dick Dale. But once puberty kicks in, the blues seems like an old man’s game, and the Johnson boys soon found themselves intoxicated by not just the dreamy sway of Ours and Our Lady Peace, but the aggressive guitar rock of Queens of the Stone Age, STP and Silverchair. Now fast-forward 3 years, the Johnson clan relocated to Manhattan, befriended drummer Marc Slutsky (ex-Splender), and rechristened themselves God or Julie.

The band’s name, like it’s songs, eludes simple explanation. “I think if people like it it’s because it ties into something way down inside them,” says Jon Paul. “The music altogether is deeper than words,” continues Aaron, “and it has its own meaning for everyone because it’s filtered through their unique experience, including the four of us.” So about the name? Adam quips, “The band was discussing a friend who wrote literally every song about either God or his girlfriend Julie. In turn “God or Julie” got thrown into our grab bag of album title ideas, but when I suggested it as our band moniker, the light bulb went on and we all jumped on it. Mainly because of it’s wide-open “what-the-fuck?” quality.”

Recording the band’s debut full-length “What Doesn’t Kill You” wasn’t an arduous process so much as an intense one. As the album was being recorded, J.P. kept spawning new ideas, the band’s sound continued to be refined, and their identity was reformed. For example, in the self-produced opening tandem “Let It Bleed Again” and “Say Your Last Goodbye” God or Julie carries the smoldering melodic torch of Placebo, HIM and Muse, but JP’s emotive falsetto and Adam, Aaron, and Marc’s lockstep confidence make these songs entirely their own. As JP puts it “I wouldn’t say our writing’s cryptic, per se, but it’s less story-oriented and more about conveying emotion.” “All the songs are a little bit on the darker side,” adds drummer Marc, “But it’s not necessarily dark music.” Other “softer side” classics such as “Fallen Soldier” and “Oxygen” only add to the brilliance and diversity of the disc. “Our musical style and sound comes more from playing together for the past seven years than anything else,” muses Adam. Little wonder God or Julie can intertwine euphoria and melancholy so effectively - you can leave the blues behind, but the blues never leave you.