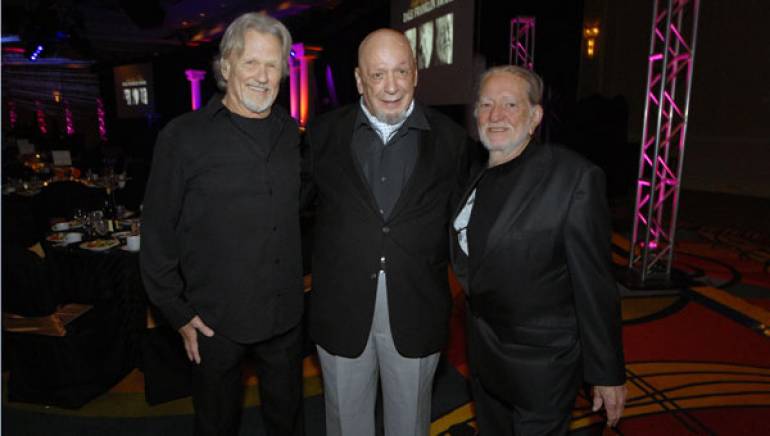 Vince Gill hosted the ceremony and Shawn Camp led the ace house band, which backed the evening’s inspired musical homage in front of a packed room of music industry executives, creators, friends and family. The Leadership Music Dale Franklin Award, presented annually by the educational non-profit organization of music professionals, was created “to recognize music trailblazers who exemplify the highest quality of leadership and leading by example.”

Reflecting on his long career, Foster smiled as he remembered “wonderful experiences with wonderful people—talent beyond describing. This means more to me than I can say,” he shared. “Thank you so much.”

A video conveying a message from influential Combine Music publisher Bob Beckham served as the fitting introduction to the Kris Kristofferson tribute. Shawn Camp kicked off the musical celebration of Kristofferson with an aching performance of “Sunday Morning Coming Down.” Lyle Lovett followed with sublimely poetic remarks on Kristofferson’s relevance and an effortlessly cool rendition of “Me & Bobby McGee.” Finally, Lee Ann Womack delivered a tender version of “Loving Her Was Easier (Than Anything I’ll Ever Do Again).” Longtime associate Tamara Saviano presented the award to Kristofferson.

“I’m kind of speechless,” said the perennially humble Kristofferson. “I’m so honored to be up here with Fred Foster and Willie Nelson. I can’t tell you what it means to me.”

Self-proclaimed lifelong fan Stephen Colbert addressed the audience via video to jump-start the tribute to Willie Nelson. Country Music Disc Jockey Hall of Famer Lee Arnold then took the stage to praise Nelson and introduce Jamey Johnson, who delivered a spellbinding acoustic version of “Angel Flying Too Close to the Ground.” Lorrie Morgan offered a sultry version of “Crazy,” followed by Randy Travis, who performed a stone-cold honky-tonk rendition of “Funny How Time Slips Away.” Longtime friend Brenda Lee presented the award to Nelson.

“Listening to people say all of these nice things, I almost gave myself a standing ovation,” Nelson joked, before concluding the evening with his characteristically poignant simplicity: “Thank y’all.”

Willie Nelson, Shawn Camp and the house band led a rousing finale of “On the Road Again,” during which they were joined by Kris Kristofferson, Lyle Lovett, Randy Travis, Billy Swan, Charlie McCoy, Jamey Johnson and Vince Gill.