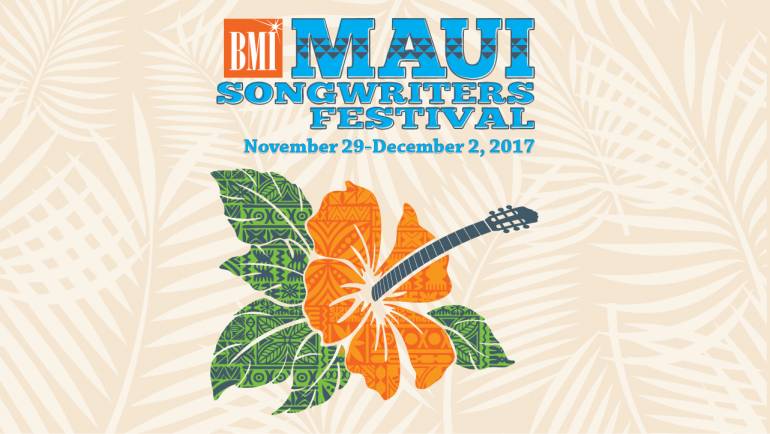 From November 29 thru December 2, the third annual BMI Maui Songwriters Festival will combine the lush landscapes and local flavor of Maui with the international acclaim of country music’s best scribes. This one-of-a-kind festival puts a spotlight on the art of songwriting with intimate sets from an all-star line-up. Country superstar Eric Church will be returning for the second year in a row to headline the festival, along with GRAMMY-winning country music singer-songwriter Maren Morris and ACM’s New Male Vocalist of the Year, Jon Pardi.

Other top songwriters featured over the three-day festival include country music hitmakers Bob DiPiero, Casey Beathard and Lee Thomas Miller, as well as Collective Soul front-man Ed Roland, Ashley McBryde (who was named Rolling Stone’s “10 New Country Artists You Need to Know”), Randy Houser, who was touted as having “one of the most powerful voices in country music” by the St. Louis Post-Dispatch, and local favorite Lily Meola, named Best of Maui for the second year in a row. There will also be additional acts to be announced soon.

“The BMI Maui Songwriters Festival has become a time-honored tradition that we hope to continue for many years to come,” said Mason Hunter, Executive Director, Strategic Partnerships. “The amazing songwriters performing to the backdrop of paradise, contributing to a good cause and the local hospitality of Maui, make this festival something we look forward to all year.”

Hosted by Storme Warren of Sirius XM’s The Highway, these concerts will fill Maui’s premiere venues including Fleetwood’s on Front Street, the Marriott Wailea Beach Resort, Tommy Bahamas at the Shops at Wailea and the Maui Arts & Cultural Center. Many of these acoustic sets will feature Nashville’s signature “songwriters-in-the-round,” where in addition to performing songwriters share the stories behind their hit songs.

Adding a philanthropic element to BMI Maui Songwriters Festival, a portion of the proceeds will once again benefit Dorvin and Betty Leis Charities, Inc., the Maui Arts & Cultural Center and the BMI Foundation, dedicated to encouraging the creation, performance, and study of music through awards, scholarships, grants, and commissions.

The third annual BMI Maui Songwriters Festival is sponsored by Goodfellow Family Foundation, XPeri, SunTrust Bank and Texas Roadhouse. Delta Air Lines is the official airline of the festival, with additional support provided by the Marriott Wailea Beach Resort, which is offering special rates to attendees.