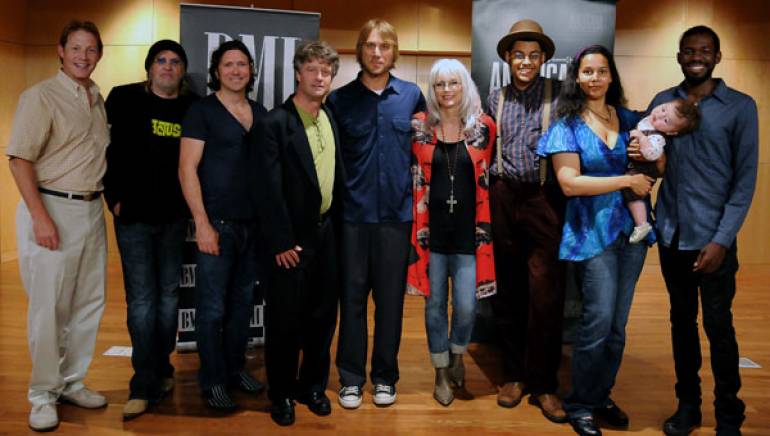 BMI proudly hosted the annual Americana Honors & Awards Nominee Announcement Party on Wednesday, May 12 at the W.O. Smith School of Music in Nashville. Roots royalty Emmylou Harris and Todd Snider announced the 2010 nominees after the crowd savored the live sounds of the Carolina Chocolate Drops.

From time-tested BMI originals including Dave Rawlings, T-Bone Burnett and Will Kimbrough to newer BMI voices including Sarah Jarosz, Band of Heathens and Ryan Bingham, the artists who will vie for the hand-painted Americana trophies embody the Wall Street Journal’s pithy definition of the genre: “singers who can sing, players who can play, and writers who can write.”

With four nods, Dave Rawlings leads the list of BMI nominations. The Dave Rawlings Machine is up for Duo/Group of the Year, while the band’s A Friend of a Friend and “Ruby” will compete in the Album and Song of the Year categories, respectively.

The winners will be announced September 9 at the historic Ryman Auditorium during the 9th Annual Americana Music Association’s Honors and Awards Show. Hosted by Jim Lauderdale and featuring a band led by Buddy Miller, the Honors & Awards ceremony will also recognize Lifetime Achievements and bestow awards in Performance, Songwriting and Instrumentalist and other important categories. Additional honorees and performers will be announced in the coming months.

ALBUM OF THE YEAR
The List, by Rosanne Cash
A Friend of a Friend, by Dave Rawlings Machine

ARTIST OF THE YEAR
Ryan Bingham

DUO/GROUP OF THE YEAR
Band of Heathens
Dave Rawlings Machine

INSTRUMENTALIST OF THE YEAR
Dave Rawlings
Will Kimbrough
Sam Bush