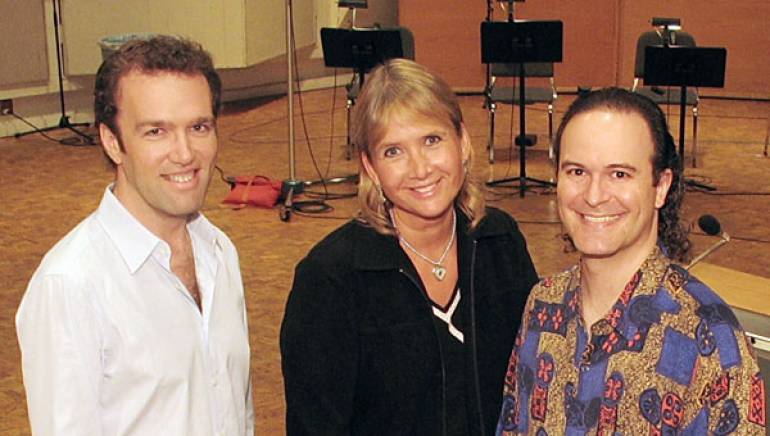 Are three composers better than one? For Lolita Ritmanis, Michael McCuistion and Kristopher Carter, the answer is yes.

For years, the three crossed paths in the close-knit world of film, TV and video game scoring. They worked together on some projects (Batman Beyond and The Zeta Project, to name two), and were in competition for others. Quickly, they realized that the sometime collaborators/sometime competitors had a bigger edge if they joined forces. In 2007, Dynamic Music Partners was born.

“We found it to be a real advantage,” says Kris Carter. “Each of us has a really broad pallet of musical interests, and times-three we have such a broad range.”

Beyond the creative advantage, teamwork helps from a practical standpoint. “Everyone is aware of what accelerated post is, which is now usual post,” Carter says of the timeframe composers are given. On an animated series like Warner Bros. Batman: The Brave and The Bold, for which Dynamic Music Partners has received a Primetime Emmy nomination, it can be as little as one week per episode.

To meet this challenge, each composer works independently, tackling a single scene or cue, and collaborating on a theme to ensure a cohesive overall sound.

Usually they write a show’s underscore, what Lolita Ritmanis describes as “the background music: the music you hear when the bad guy appears at the door, or the swelling strings before the kiss.” An exception was their Emmy-nominated “Mayhem of the Music Meister” episode of Batman: The Brave and The Bold.

“Producer James Tucker had the idea to do a full-blown musical, a Broadway-style show,” says Ritmanis. “We had three months to realize the story and show. We just jumped into the deep end and started working. The whole process was quite intense.”

There were multiple challenges. Says Michael McCuistion, “First of all, the subject matter is Batman, and that in itself is a huge challenge because you have this iconic character.” But also, “it was literally a blank canvas. Instead of coming to the party where everybody’s already made their contribution and we’re putting on the finishing touches with music, in this case it started with music.”

The 62nd Primetime Emmy Awards will be broadcast live Sunday, August 29 at 8 p.m. EST on NBC.