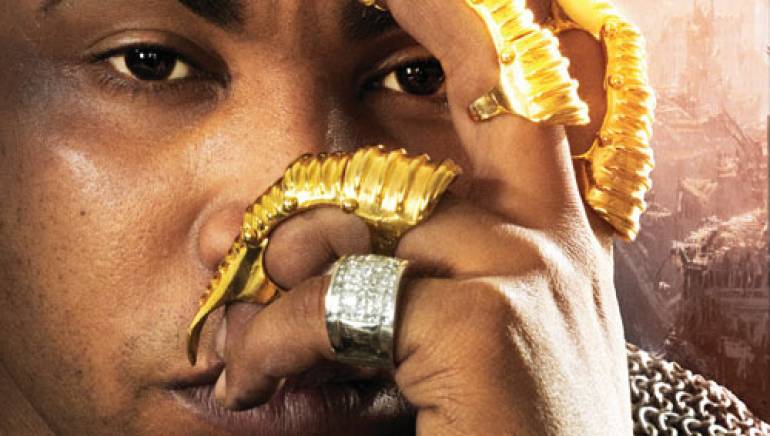 Everything about reggaetón superstar Don Omar is outsized: his beat-heavy hits, a blazing stage show and his extraordinary success. Nominated for a 2006 Latin Grammy, King of Kings, Omar’s latest release, debuted at No. 1 and spent 11 successive weeks topping the Latin sales charts. The highest-ranking reggaetón album ever also spun off “Angelito,” a No. 1 single on the Billboard Latin Rhythm Radio chart. Don Omar even beat the in-store appearance sales record at DisneyWorld’s Virgin music store — a mark previously set by pop star Britney Spears.

Within his genre, Don Omar is expanding the rhythmic reach of his beats beyond jackhammer predictability just as he elevates his themes with conscious messages. Beneath his boldness lies a deeper subtext, one of uplifting spirituality and determination inspired by, as he put it, “the real king of kings.”

This spirit is a through line in his life: Born William Landrón in Villa Palmeras, Puerto Rico, Omar was previously a preacher at the Fuente de Agua Viva church in Bayamón. Although he eventually departed from the pulpit (a matter he addressed in his song “Aunque Te Fuiste”), evangelistic fervor was a hallmark of his music. From the sanctuary to the streets, Omar joined the growing reggaetón movement and hooked up with Héctor el Bambino (now know as Hector El Father) of the popular duo Héctor y Tito, producing and writing songs for the pair, and eventually collaborating vocally on “A la Reconquista.” With his solo hit “Desde que Llego” in 2002 and the release of his own CD, The Last Don, he rode the rising reggaetón wave, just beginning to crash ashore into the lucrative stateside market.

His debut featured extensive production work by Luny Tunes and Eliel, two of reggaetón’s preeminent hitmakers, and showcased two massive singles, “Intocable” and “Dile.” Omar scored further hits with Luny Tunes on their compilation albums Mas Flow and Trayectoria, but his break, “Reggaeton Latino,” came from the Chosen Few compilation. The Latino pride anthem hit just as reggaetón was exploding across the U.S. urban landscape in the summer of 2005 and was so popular that a bilingual remix and a video — only the second reggaetón song with MTV airplay in the States — was created with preeminent Latino rappers N.O.R.E. and Fat Joe.

Don Omar’s inventory of accolades includes a 2006 BMI Latin Award for “Pobre Diabla,” and Latin Pop Album of the Year, New Artist and Latin Rap/Hip-Hop Album of the Year from the 2003 Billboard Latin Music Awards. The platinum-selling live version of The Last Don was also nominated for Urban Music Album at the 2005 Latin Grammys.

Omar is mounting a multi-million dollar King of Kings tour, a massive stage production complete with elaborate pyrotechnics and full-blown theatrical and dance elements. In the dazzling, over-the-top show, at one point Omar emerges in a white suit with a full-length, hooded cape to deliver a fire-and-brimstone sermon, “Predica” (Preach), that neatly brings his career full cycle.

Omar’s impact on reggaetón is now extending outside of the studio and stage through his recent partnership with UMBRO, a globally recognized football brand to launch the Don Omar Casual Clothing Collection. Foot Locker in the U.S. and Puerto Rico is distributing the line of urban clothing.

A complex artist and a sterling songwriter, Don Omar drives a shifting style with both bravado and substance. As reggaetón outgrows its adolescence, the thoughtfulness and inclusion of Omar may well be a signpost of what lies ahead for the urban market’s fastest growing genre.