Posted in MusicWorld on October 15, 2008 by Rob Patterson 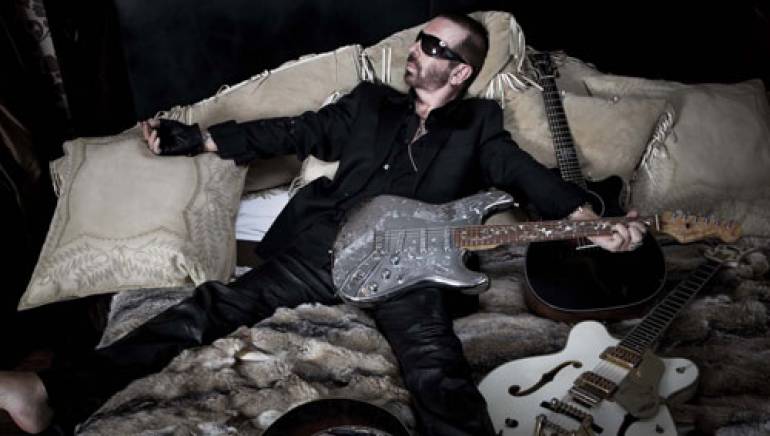 Whoever insisted that you can’t do it all, obviously never met Dave Stewart. Best known as one-half of the hit-making duo Eurythmics with singer Annie Lennox, he is a songwriter, guitarist and producer for some of contemporary music’s top acts whose output also includes everything from a musical to film scores. Stewart also has produced and directed films, hosts HBO’s On The Record interview program, created graphic novels, is a prestigiously exhibited photographer, and founded the 46664 global initiative to combat HIV/AIDS and the environmental think tank Greenpeace Works.

So it’s no wonder that stars like Mick Jagger, Bob Dylan, U2, Aretha Franklin, Tom Petty, Celine Dion and many others have worked with Stewart as a musical go-to-guy with seemingly limitless imagination and creativity. His legacy is now spotlighted on his latest musical venture: The Dave Stewart Songbook, Vol. 1. The package is a 20-song, two CD collection of some of his best-known collaboratively written and solo songs newly recorded by his touring band with full orchestra, and comes with an accompanying hardcover book that tells the stories behind the creations and includes photographs by Stewart.

It spotlights Stewart’s musical alchemy and his affection for creative interaction with the likes of Jon Bon Jovi, Gwen Stefani, Bryan Ferry, Bob Geldof and Sinead O’Connor in addition to some of the aforementioned. “Writing songs with other people is like falling in love over and over again,” says Stewart. ”It’s a fast track into someone’s soul — you can feel their heart beating against yours.”

Stewart became a hot musical talent on the rise in his teens when his band Longdancer signed to Elton John’s Rocket Records. He united with Lennox in the late 1970s as the band The Tourists, and, by the early ’80s, the two became Eurythmics, rising to international stardom thanks to such hits as “Sweet Dreams (Are Made of This), “Here Comes the Rain Again,” “Would I Lie to You?” and “Missionary Man.”

As an artist in his own right, Stewart has issued albums under his own name as well as with the band Spiritual Cowboys (with Pretenders drummer Martin Chambers) and as Platinum Weird with singer Kara DioGuardi, for which Stewart created a fictitious early 1970s history that was spotlighted in a VH1 “mockumentary” about the band. He has also taken his song revisions a la Songbook on tour as Dave Stewart and His 30-Piece Rock Fabulous Orchestra.

As no less of an icon as Bob Dylan notes, “Captain Dave is a dreamer and a fearless innovator, a visionary of high order.”