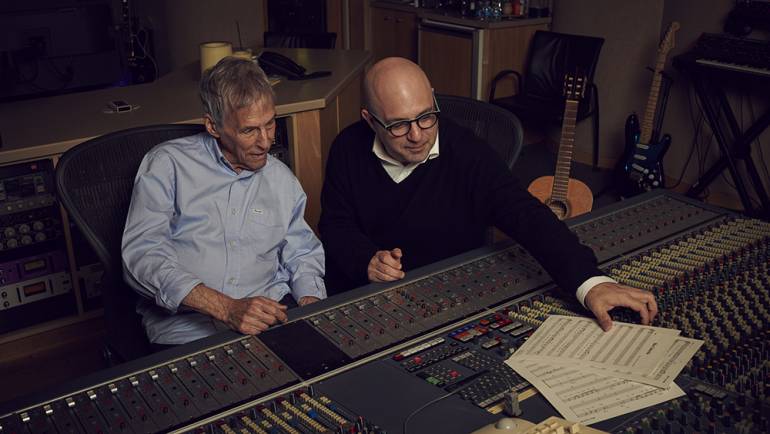 Daniel Tashian was already on a roll. An accomplished songwriter/producer and multi-instrumentalist, Tashian — the son of Barry and Holly Tashian, the celebrated bluegrass duo — started making music early on, landing a deal with Elektra Records at the age of 19. He formed the Nashville-based band The Silver Seas (originally The Bees) in 1999, releasing five critically claimed albums with the band, while also releasing albums on his own; his debut album, Sweetie, was produced by T. Bone Burnett. A tirelessly prolific music creator, Tashian has written songs with Lee Ann Womack, Tim McGraw, Martina McBride, Chris Lane, Josh Turner, LIssie, Natalie Hembie, Bob DiPiero, Maren Morris, Logan Mize and many more.

In 2018, Tashian and fellow BMI songwriter/producer Ian Fitchuk co-produced Kacey Musgrave’s Golden Hour, which became a mammoth crossover hit. As co-writer of seven of the album’s 13 songs, the project was a major breakthrough for Tashian, earning him a CMA award, ACM Award and the GRAMMY Awards for Best Country Album and Album of The Year. Switching gears entirely, he then released I Love Rainy Days, a children’s record that earned him yet another GRAMMY nomination. More recently, he reunited with Fitchuk to co-write and co-produce Brett Eldredge’s new album, Sunday Drive.

It was on the back of these accomplishments that Tashian began collaborating with one of his heroes, songwriting legend Burt Bacharach. What started off as an informal exchange of ideas turned into a full-fledged EP put out by Big Yellow Dog Music, Blue Umbrella, a dream project for Tashian and the first collection of new music by Bacharach to surface in 15 years.

To celebrate this important collaboration, the GRAMMY Museum will be hosting a live online discussion with the two songwriters on the day before the album is released. Moderated by Scott Goldman, this conversation will take place on July 30th at 4 p.m. PT for fans to tune into and watch live from their homes via Zoom. BMI affiliates can tune in for free with the promo code BMIACCESS. Click here for more information.

We caught up with Tashian in advance of this discussion and the release of Blue Umbrella to find out how it all came about and what else he’s got in the works. Here’s what he had to say.

How exactly did Blue Umbrella come about? How did you first get in touch?

Melody Federer asked me to produce a song she had written with Burt, and she FaceTimed me from his house once. Then, I sent him a lyrics for “Blue Umbrella” and after the GRAMMYS, I went to his house and we worked on that song. We got along well and had a good workflow, so we decided to do more songs.

Was it intimidating to be working with such a legendary, established songwriter?

A little bit, at first, but I found Burt to be very warm and welcoming. Also, you reach a point where you have to put those feelings aside and focus on the task at hand.

What was the creative process like? How did the collaboration take shape?

Blue Umbrella was an unforgettable adventure. Meeting Burt, and working with him, has been a real high-water-mark for me. We typically started by me texting a couple stanzas of lyrics to him, and then he would work on the melodies and chords and I would go to his house in LA and we would play them together. A lot of times he would suggest we have dinner after we wrote and he would often pick me up at my hotel in a black jag.

What was the most memorable aspect of putting Blue Umbrella together?

Being in the studio was incredible. The musicians. Burt would sort of correct me in the melodies if I veered into any dreadful “ad-lib” territory. He advises strongly against deviating from the melody or the song, which, once you get used to it, is a pretty good way to go about certain things. I also have a memory of Burt driving off into the night and waving out the window of a black Escalade. He almost reminds you of James Bond sometimes.

You’ve also been very busy during the lockdown, finishing your second children’s album. Your first was nominated for a GRAMMY. Did that put any pressure on you for the follow-up?

It was so great to be acknowledged by the GRAMMYs for the last one, and yes, you do sort of hope to get back there and win, and of course you hope, but also, you have to put all of those thoughts aside at the end of the day and just make he best music you can.

Was that record finished prior to the arrival of the pandemic?

No, the record was made on lockdown together. We found ourselves washed up on a beach we’d never been to before - stuck in the house together with all five of us.  I knew I had to make a follow up to I Love Rainy Days to prove that I wasn’t a fly-by-night one-hit-wonder. So I knew we had to do it, but I never knew when I would have the time, then all of a sudden, we did. The process would be starting off with conversation with one or all of my daughters and the idea or the title would come out of that.

Then I would play the tune for a few days and see if anyone could catch the melody and hum along, and if they did, I would record then. After a couple weeks we had an album! I recorded them in my closet.

What was the overriding theme of your second children’s album?

The overriding theme is that curiosity is in the heart of every kid. And in our hearts, we are all kids. As far as specific themes, travel, imagination, weather, astronomers!

What message are you trying to convey?

Not really a specific message. There’s stuff in the songs, although if I had to pick something, maybe curiosity will take you many places.

How have you been staying inspired and creative in the interim?

I’m always inspired. The Latin meaning of the word “inspired” is “to breathe life into,” so I believe I must work to inspire myself, so to speak. Lately, I make a list in the morning of what I hope to get done and then check it off, sometimes, if I end up doing any of it.

Taking each day as it comes. I personally miss being in the studio with other musicians. I have only been working at home, lately, which is fine,

What role has BMI played in your trajectory so far?

BMI has been great all the way down the line. They’ve introduced me to great writers, and when I had a writers’ night, they sponsored it. I’ve gotten solid advice from Jody Williams and many others. I love BMI.