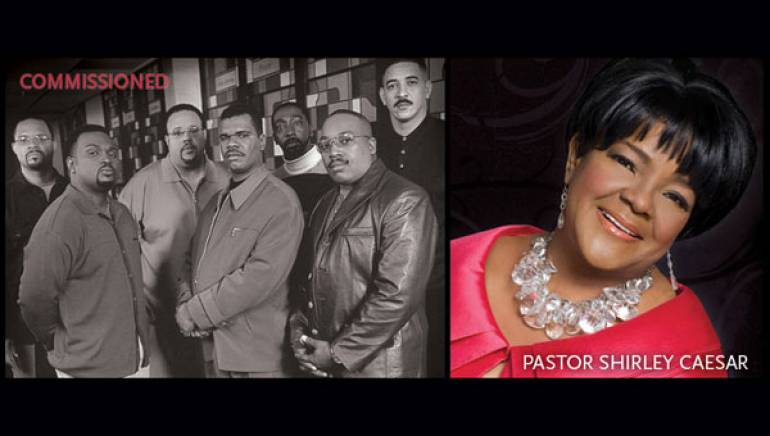 BMI honored gospel greats Commissioned and Pastor Shirley Caesar at the organization’s 12th Annual Trailblazers of Gospel Music Awards Luncheon. The event was held January 14, 2011, at Rocketown in Nashville and was hosted by Catherine Brewton, BMI Vice President, Writer/Publisher Relations, and Del Bryant, BMI President & CEO. The ceremony will be telecast as a special on the Gospel Music Channel Saturday, February 19, 2011 at 7 p.m.; an encore presentation will air at 8:30 p.m.

The original members of Commissioned gathered on stage for the finale, marking the group’s first performance together in over a decade. They were greeted with a standing ovation by the audience of gospel music’s premier songwriters and recording artists, executives, and legends.

For 17 years, six-member group Commissioned spread the gospel with an emboldened sense of purpose and fierce musical skill. The group was co-founded in 1982 by past BMI Trailblazers honoree Fred Hammond, along with Michael Brooks, Karl Reid, Keith Stanton, Mitchell Jones and Michael Williams. As the lineup changed, standout members included Marvin Sapp and others. Funk, r&b and hip-hop grooves helped shape Commissioned’s groundbreaking sound, as lush harmonies carried the message to a receptive young audience that had previously seemed hard to reach. While Commissioned parted ways in 1999, their music remains a bold influence of contemporary gospel stars and a beloved favorite of fans around the world.

Pastor Shirley Caesar is the quintessential artist: In her soul-stirring gospel music, she has embodied progress without forsaking tradition. Her work with the Caravans first introduced her to large audiences. During her time with the legendary group, she preached her first sermon and delivered lead vocals on hits including “I Won’t Be Back,” “No Coward Soldiers,” “Holy Boldness,” and “Choose Ye This Day.” As a solo artist, Caesar soared. She embraced contemporary production and secular rhythms like r&b and disco. As a result, she climbed pop, r&b and gospel charts. In addition to a stunning 11 Grammys, Pastor Caesar has earned 18 Dove Awards and 14 Stellar Awards. Currently, she is the Senior Pastor of Mount Calvary Word of Faith in Raleigh, NC.