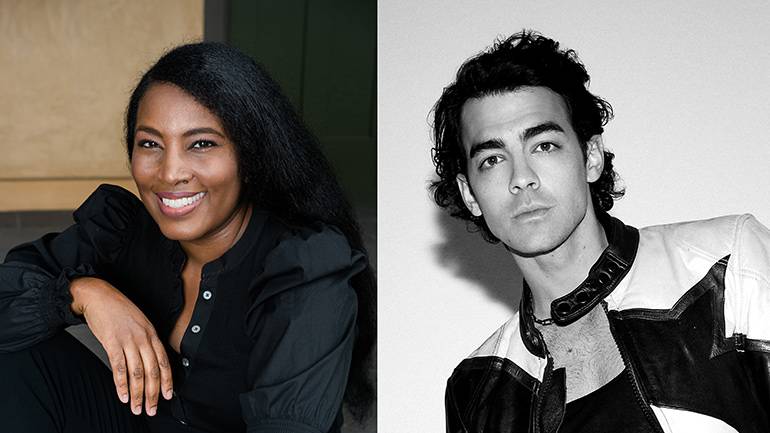 Based on the book by Adam Makos, director J.D. Dillard’s new movie, Devotion, depicts the experience, based on true events, of two elite U.S. Navy fighter pilots who go above and beyond the call of duty during the Korean War to become two of the Navy’s most celebrated wingmen. But beyond simply a war film, Devotion is the inspirational story of officer Jesse Brown, the first Black aviator in U.S. Navy history, and his enduring friendship with fellow officer Tom Hudner. It’s also a compelling saga of heroism and sacrifice that is already resonating with critics and audiences alike. BMI caught up with two of its affiliates involved in the film, composer Chanda Dancy, who wrote the score, and singer/songwriter/actor Joe Jonas, who both co-starred in the film as pilot Marty Goode and co-wrote and duetted with Khalid on “Not Alone,” which is featured on the film’s soundtrack. Here’s what they had to say about their work on this amazing project.

How did you each get involved with this film? What was it about this project that drew each of you in?

Dancy: When I first read the script, I cried, profusely! It was both amazing and heartbreaking, and I felt so much love for Jesse, Daisy, and Tom. It is a true war story, but it is mainly a story about true love in every sense of the word. This feeling of everlasting and true love is what really drew me in.

Jonas: I got involved in Devotion like any other audition process; I self-filmed an audition tape in hopes to play the role of Marty Goode. Reading the book and then the script really drew me into this project. I got a call back to speak to the director J. D. Dillard and we hit it off immediately. Devotion is an incredible true story about the Korean War, so the first thing we spoke about was how the world needs to know about this heartbreaking, beautiful and heroic story. He expertly captured not only the true events that took place, but also this friendship that has lived on for many years.

Chanda, as the composer, what did you feel was the most important aspect to convey with this score?

Dancy: The heart of everything in this film is love. Love for family, love for friends, love for country and Devotion to your fellow man. I wanted to create a score that combined several elements: an emotional core, big sweeping orchestral themes, a very masculine sound, and a marriage of the old and new: combining a traditional orchestral score with modern sounds/synths/sensibilities to create something that sounds familiar but fresh.

Joe, along with co-starring in the film (for which you are already accruing glowing reviews), you co-wrote and performed the final song, “Not Alone,” with Khalid. What was your mindset going into the writing of this song? And given its placement in the film, did you feel any extra pressure to really get it right?

Jonas: I watched an early edit of the film with J. D., my wife Sophie, and my good friend Ryan Tedder. Even with toy planes flying past the screen as a special FX placeholder, the film moved us to feel the true emotion of what it’s trying to express. It didn’t need any of the flashy stuff; the emotion of the film, even in this early version, really rang through. Ryan Tedder and I got up immediately and started writing the song in real-time on a piano that was in the room. We then brought in our friends HARV and Khalid to finish the tune.

I love having this as a duet with Khalid; his vocals are so strong, and his melodies are beautiful. It was amazing being able to create something for a project that was already so close to my heart. I’ve had the opportunity to write for other projects in my career, but nothing to this magnitude.

During the writing process, my main goal was to think about how humans are connected in the film. Not just the bond between Tom and Jesse; Jesse’s relationship with his daughter; his wife, and the Fighting 32’s, but also the relationships with all of the veterans and people out there that are actively serving. What are the common denominators there? They all share the fact that they can’t physically be with their family or other people that they love all the time. It’s the feeling that they get, whether emotionally or spiritually, that their loved ones are always there with them.

Chanda, you have an impressive list of scores dating back to the early 2000’s. How was your approach different for this film?

Dancy: I would say that the biggest difference between the Devotion score and many of my past scores is the sheer scale of it! Devotion is grand in every sense of the word - the highs are high, and the lows are low and everything in between. I’m truly proud of the work, and hope that it does justice to the epic legacies of the Brown and Hudner families.

What are your biggest hopes for Devotion?

Dancy: Jesse Brown, Thomas Hudner and the men of VFA 32 existed and showed us what it truly means to be a person who can be depended upon. I hope that their examples of love for your fellow man resonates with audiences and uplifts, something that we all need during these trying times.

Jonas: My biggest hope for Devotion is that we are able to make enough people aware of this true story and the events that really took place. I was embarrassed to not know about this story before hearing about it. I think that most of the cast also found out the same way I did. The first conversation I had with J. D. was both of us just kind of shaking our heads thinking, “How did this happen?” It’s important to understand that the story of the Korean War and the relationship of Jesse and Tom needs to be told more. It’s also still a possibility to get Jesse’s remains and body back home. I think that is so essential and important.

What key advice have you received in your career that you can you share with aspiring music creators?

Dancy: I have been told that a career in film scoring is a marathon, not a sprint. You MUST take good care of your body, mind, and spirit, and live a well-rounded life with friends and family, so as to prevent burn out. I joined BMI TWENTY years ago after winning the Pete Carpenter Film Scoring Fellowship. It took me 12 years to become a full-time composer and 20 years from that first internship to now having two major studio films back-to-back. I don’t really think it will take most people that long, especially now that women film composers are getting more studio opportunities, but the advice is still the same!

Jonas: A key piece of advice that I’ve received is that you have to find your own thing. I know that’s a pretty broad statement, but I think in the world of social media, and with how quickly you can find other artists and be influenced, it’s really important. We can sometimes be overly influenced to the point of copy and pasting, or even trying to create something that’s new and end up making something that sounds like it’s already been done before. Obviously, we can all find inspiration from music, entertainers, and shows out in the world, but we have to find something that is unique to us. It’s key to create something that you feel like is your own lane, your own thing, and something that’s fresh for people’s ears.

What’s next for each of you?

Dancy: My next project is the Whitney Houston biopic I Wanna Dance With Somebody, which will have its wide release on December 21st.

Jonas: I have a few concerts coming up with my brothers before the end of the year, as well as working on an album that we are in the process of finishing.

Tell us about the role BMI plays in your career.

Dancy: BMI has supported me in my career since winning the Pete Carpenter Fellowship In Film Scoring way back in 2002. They do more than just help with performance royalties, which are incredibly important, of course, but BMI has also been an important cheerleader in my career. From giving me a platform on which to speak of my experiences, to fellowships and the Sundance Composer’s Lab, BMI has simply always been there for me since day one. I cannot express adequately my sincere gratitude!

Jonas: BMI has been a huge part of my career since day one. They’ve helped me navigate the ever-changing world of performance royalties and give me the peace of mind that nothing is slipping through the cracks. I’ve been writing music since I was a teenager. In my career, I’ve been on different record labels, had various music projects and my music has been on many different mediums. I’m grateful that BMI has been there with me every step of the way. These days I really love writing for Film and TV and I think it’s a great opportunity for musicians and songwriters to take a different approach to writing for their own projects and take on a new mindset. BMI is so great about helping us songwriters navigate that process.