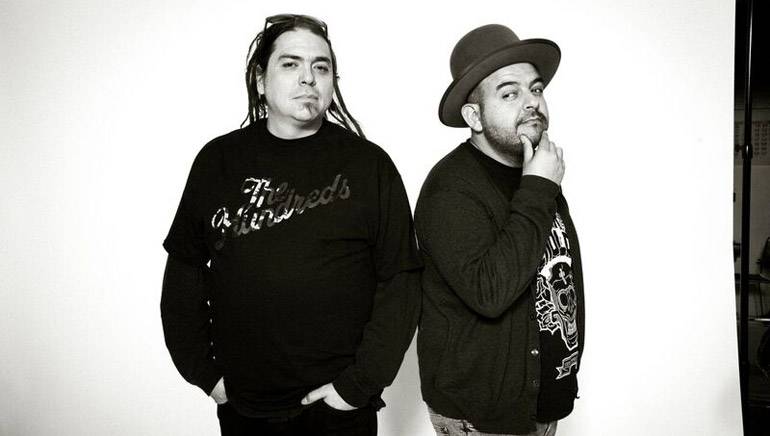 As the creative mastermind of Mexican Institute of Sound [MIS] and an in-demand, versatile DJ/producer, respectively, Camilo Lara and Toy Selectah (a.k.a Antonio Hernandez) had already established themselves as pivotal players in Latin American music, renowned for their resourceful innovation in melding musical styles. Lara had made the jump from being a successful music executive into a sought-after remixer and producer, working with luminaries from Morrissey to the Beastie Boys, while Toy Selectah, a major player in his native Mexico’s hip-hop scene, fostered a singular style that earned him an affiliation with Diplo’s Mad Decent label, as well as a GRAMMY nomination and a BMI Latin Award. But after a 2013 collaboration called Como Te Voy A Olvidar found them fusing cutting-edge electronica with traditional cambia music, their combined passion to transcend musical divides paved the way for what many might have considered an impossibly ambitious and genuinely international new project, Compass.

Beginning in 2014, the recording process for Compass found Lara and Toy Selectah literally spanning the globe, working in seven different major cities with upwards of 90 different collaborators. Even more impressively, the list of participants on Compass is a who’s-who of musical luminaries from across a wide spectrum of genres and cultures. From the dulcet voice to Boy George and  the thunderous percussion of Sepultura’s Igor Cavalera to the signature wordplay of hip-hop pioneer MC Lyte and the inimitable guitar-playing of Roxy Music’s Phil Manzanera and countless others, Compass deftly merges elements of rock, pop, R&B, reggae, hip-hop, punk, indie, electronica, cumbia, and much more. The highly anticipated album is slated for an August 26 release. BMI caught up with Lara and Toy Selectah in advance of this auspicious release to find out a little more…

What first inspired you to take on this mammoth project? Was it always going to be this huge, or did it just become huge?

CAMILO LARA: Compass started as an intimate project between Toy and I. But right after Toy sent the first beats, I told him “what if we invite more people?… People we love and admire.” Then we got the support from Redbull to use the studios worldwide, so it officially become a mammoth!

TOY SELECTAH: It was an interesting experience for us as musicians and producers, after all these years of traveling and doing records, to put together and hold a mammoth project was a thing !!

With so many different elements at work, how would you describe the finished album?

LARA: Well…it is the living proof that dance music is a unifying factor. There is only one dance floor, and all sorts of rhythms and people can live there. From reggae, to Brazilian, to electronic, to hip hop.  On the dance floor there are no racial differences, economic classes…there is only democracy and freedom.

What did you envision as the ultimate goal of Compass?

LARA: To be able to do the Babylon of the albums. A place where all rhythms can co-exist and make sense next to each other.

In terms of shaping the actual music, what was it like in the studio? How much was improvised?

LARA:  The studio was very exciting. I guess the big challenge was to get the flavor we wanted from each performer. To watch when that happened was pure magic!

TOY:  Alquimia! [“alchemy”] … To make something happen with different vibes, personalities and never-before-related artists, creating new music through our ears and minds.

What was the most unexpected moment during the making of this album?

LARA:  Every day was a powerful magic moment. From seeing Eugene from Gogol Bordello record his vocals or MC Lyte, Bonde Do Role, or Emicida … It was a big life lesson.

Tell us about bringing together so many disparate elements into one, cohesive piece

LARA:  If you check out Toy and I’s careers, it’s very coherent. The list of performers is made up of people we admire, friends and new artists which who are exciting to us. So, in a way, it’s not such a crazy mix. It’s a very thoughtful, curatorial exercise.

How does Compass manifest itself in a live context?

LARA: Its fun! We play with some of the collaborators. Toy does the guitar and I do the keyboards. We have a band of seven people. It’s always exciting to do that live. We invite different people who recorded on the album for each show.

TOY: I think, for us, the vocal and the MC elements are very important on Compass. It’s a very important part on the album, and we take it seriously for live shows too. We’ve been fortunate enough to get Matty Rico from New York, Serko Fu from Mexico and Tiombe Lockhart coming from Los Angeles, plus a big list of other collaborators on almost every Compass show to date.

How do you follow such a broad project up? Will there be a sequel?

LARA: Yes. For sure. We have enough music to release a volume 2 and 3…and possible 4!

Can you tell us about your relationship with BMI?

LARA: BMI is our home. Personally, I’m a big fan of Delia and her team. Very proud of being part of it. I’ve been on BMI for almost a decade now.

Find out more about Compass by clicking here.