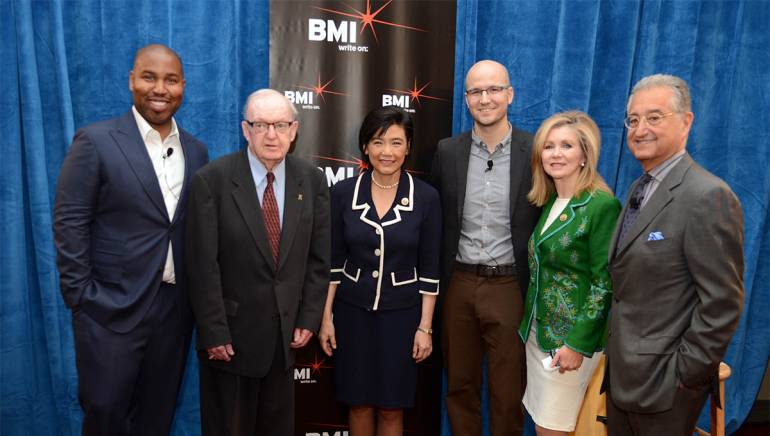 There is nothing more compelling than hearing songwriters talk about and play their own music in front of a crowd. So, who better to bring to the BMI congressional briefing on songwriter rights than songwriters? Armed with the 2012 BMI Country Songwriter of the Year, Luke Laird, and multi-GRAMMY nominated Claude Kelly, BMI CEO and President Del Bryant, Senior Vice President Richard Conlon and other BMI senior executives went to Washington, D.C. on behalf of all songwriters. In an impassioned effort to educate Congressional policy staff, legislators, and Washington lobbyists on the craft of songwriting, BMI CEO Del Bryant hosted a Q&A panel with Laird and Kelly, who spoke about how income is derived and how songwriters do their job, highlighting the lifecycle of a song. Compensation, the royalty distribution stream, the overall value of music, and impact of intellectual property and music rights management in the digital age were also discussed. The event, held April 23, 2013, included performances by both Laird and Kelly.

Claude Kelly’s songs have sold more than 25 million copies to date, blanketed radio airwaves around the world, garnered multiple GRAMMY and Billboard nominations and dominated international song charts. His star-studded resume includes penning No. 1 smash singles for Britney Spears (“Circus”), Bruno Mars (“Grenade”) and Kelly Clarkson (“My Life Would Suck Without You”), along with hits for artists such as Christina Aguilera, Jessie J, Miley Cyrus, Adam Lambert, Martina McBride, Akon and many more, including the late great Michael Jackson and Whitney Houston. He recently added the role of executive-producer to his credits, overseeing new releases from Karmin and Tamia (he received two GRAMMY nods for the latter).