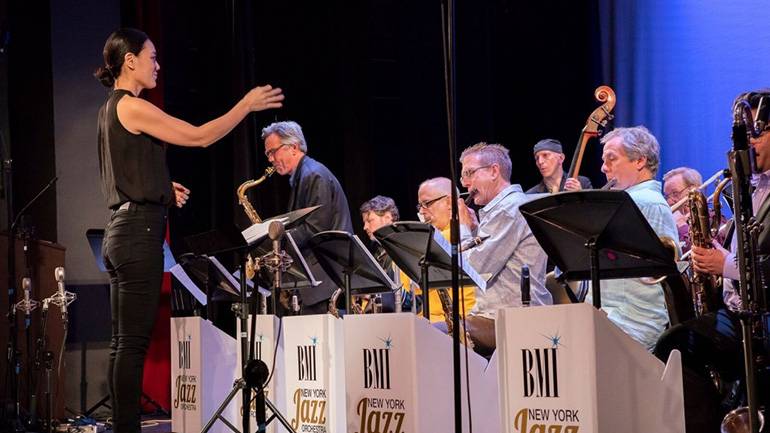 The BMI Jazz Composers Workshop, a prestigious creative forum for musical creation and development, will present the best new big band and jazz orchestra compositions produced during the past year at the 31st annual summer showcase. The BMI/New York Jazz Orchestra, a modern repertory ensemble made up of leading New York musicians, will be featured at this free event held at The Marjorie S. Deane Little Theater (10 West 64th Street) on Wednesday, June 12 at 8:00 PM. Doors will open at 7 PM and seating is on a first come, first served basis.

Musical Director Andy Farber will be returning for the fourth consecutive year to lead the program, and will be joined for the first time by GRAMMY-nominated trombonist, composer and arranger, Alan Ferber. Farber teaches jazz composition and arranging at The Juilliard School in New York City, and has written arrangements for legendary artists including Shirley Horn and Jon Hendricks, as well as for symphony orchestras including the Boston Pops Orchestra. Outside the realm of jazz, Farber also composes music for media, including TV commercials, TV shows, web series, documentaries, and feature films. Alan Ferber, who serves as an adjunct professor of Jazz Studies at New York University’s Steinhardt School, has performed and/or recorded with a notable variety of jazz artists including Esperanza Spalding, the Ted Nash Big Band, the Dr. Lonnie Smith Octet, and the Charlie Hunter Quintet. Outside the jazz genre, his collaborations include working with Peter Gabriel, Paul Simon, Sufjan Stevens, and Dr. Dre.

“What an incredible season it’s been,” said musical director Farber. “Over the past four years, I’ve had the privilege of guiding some of the best emerging jazz composers around, and with Alan on board this year, we are delighted to have the BMI/New York Jazz Orchestra premiere nine new pieces that were created during this season’s intensive workshop.”

BMI’s Senior Director of Jazz & Musical Theatre, Pat Cook, noted, “This season’s participants have really blown me away. I’ve been involved with this workshop for four years now and the talent, dedication and willingness to learn of each workshop member every season never ceases to amaze me. I’m very excited for them to showcase their hard work. It’s sure to be a lovely night of great music.”

Since its founding in 1939, BMI has always been dedicated to fostering the growth and development of Jazz in the music community, and that dedication continues with this year’s Jazz Composers Workshop concert. Following the performances, the BMI Foundation will award the 20th annual Charlie Parker Jazz Composition Prize to the writer of the best new work composed in this year’s workshop. The judges include former director of the Jazz Composers Workshop, Michael Abene, accomplished composer and current Jazz at Lincoln Center Orchestra member, Sherman Irby, and past recipient of the Charlie Parker Composition Award and Manny Album Commission, Sara Jacovino.

The winning composer will receive the Manny Albam Commission, named in memory of the workshop’s co-founder and longtime musical director, to compose a new piece for the 2019 concert. The winner of last year’s prize, Jihye Lee, will premiere her commissioned work at this year’s concert.