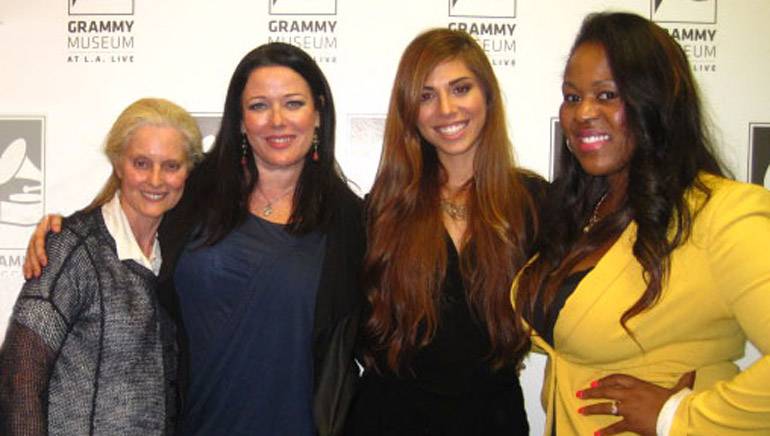 Broadcast Music, Inc. proudly supported the “Chart Toppers: Ladies Night” event on October 22 at the GRAMMY Museum in Los Angeles. It was the most recent installment of the annual “Songwriter/Producers-in-the-Round” event series from the Songwriters Hall of Fame (SHOF), in collaboration with the GRAMMY Museum. The night featured a stellar gathering of women currently at the top of their game, including BMI songwriters Lauren Christy, Christina Perri and Makeba Riddick.

Each of the ladies spoke about their craft, chronicled their rise to the top and shared stories behind some of their biggest hits. Melinda Newman, freelance entertainment journalist and former West Coast Bureau Chief/Deputy Editor for Billboard Magazine, moderated the discussion.

Christy, a three-time GRAMMY-nominated songwriter who has worked with Shakira, Christina Aguilera, Kelly Clarkson, Britney Spears and Enrique Iglesias, among many others, treated the audience to special acoustic performances of “I’m With You” and “Complicated,” two massive hits she wrote for Avril Lavigne. “My friend once told me, ‘Lauren, don’t get so wound up about it. It’s not brain surgery; it’s just a three-and-a-half minute pop song, so just try to say something in a slightly different way.’ “

Riddick, whose undeniable gift for songwriting has made her one of the industry’s hottest, most in-demand songwriters, talked about writing hits for Beyoncé (“Deja Vu”) and Rihanna (“Live Your Life”). “If the music is good, it’s going to tell me what to say,” she said of her songwriting process.  Riddick has also written for Janet Jackson, Mariah Carey, Lady Gaga, Fantasia, Toni Braxton and many more.

Perri talked about the life-changing moment she had in the summer of 2010 when her song “Jar of Hearts” was featured on So You Think You Can Dance. Viewers began downloading the song from iTunes in droves, sending “Jar of Hearts” into the top of the charts. Prior to that, Perri said she was a “professional waitress.” Perri also talked about being a “Twi-hard,” and how her song “A Thousand Years” ended up in a critical scene of the last Twilight movie, Breaking Dawn Part 2. Having sold over one million copies of her debut album, lovestrong, Perri is currently putting the finishing touches on her sophomore release, due in early 2014. As a special treat to the audience, she previewed a brand new track from that album, the beautiful, piano-driven ballad, “Human.”