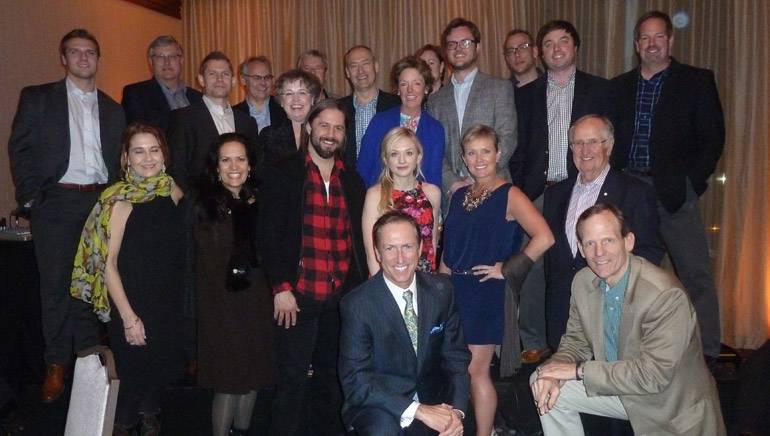 BMI songwriter Emily Kinney is pictured with the AIMS group, along with Nashville singer-songwriter Hugh Mitchell and BMI’s Dan Spears.

BMI provided the musical entertainment for the annual Association of Independent Metropolitan Radio Stations (AIMS) conference held recently (3/1-3/3) at the Omni Hotel in Nashville. Host Tony Richards of Federated Media was intent on bringing the music of Music City to all of the conference events, so BMI songwriters were featured at every meal and incorporated into the evening activities. The opening night dinner featured a performance by singer-songwriter Emily Kinney of the popular television series The Walking Dead.  Emily played several songs from her upcoming album This is War, including the single “Rockstar” which was released to radio in December.

BMI songwriter and South Dakota native Hailey Steele was the featured performer during an event luncheon and entertained the crowd with a number of tunes from her recently released self-titled album. Hailey was a contestant on the hit television show The Voice while part of the duo “The LiNe” and in 2013 was the youngest member ever inducted into the South Dakota Country Music Hall of Fame.

The final day of the conference featured a lunchtime performance by award-winning BMI songwriter Phillip White. White has written hit songs for Rascal Flatts  and Reba McIntire. In the evening, attendees moved over to The Standard, where they were treated to a good old fashioned Nashville guitar pull featuring iconic BMI songwriters Even Stevens, Hugh Prestwood, and Wynn Varble, with a special guest appearance by hit writer Kendell Marvell. Collectively the four have written dozens of chart toppers for the likes of Eddie Rabbit, Dr. Hook, Brad Paisley, Gary Allan, Jake Owen, Trisha Yearwood, George Strait and Randy Travis.