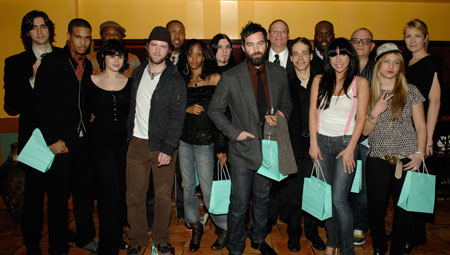 Dave Katz
Prolific songwriter for bands like Coheed + Cambria, Gym Class Heroes, Boys Like Girls; wrote and produced “Bring It (Snakes on a Plane)” for the Snakes on a Plane soundtrack; worked with Roger Daltry on his 1992 release, Rocks in the Head.

Lady GaGa
Singer/songwriter and N.Y. native, GaGa was chosen by the Songwriter’s Hall of Fame as one of nine performers in the 2006 New Songwriter’s Showcase, and as result, was signed to a production deal with Sony’s multi-platinum producer, Rob Fusari; since then GaGa has been in the midst of a label and industry frenzy!

Lanz
Songwriter/rapper; by 13, Lanz was already making an impression on New York’s underground rap scene, performing at clubs around town. At 16, her razor sharp lyrics and delivery on tough issues caught the attention of Interscope/Geffen/A&M Chairman Jimmy Iovine, who signed her. Currently finishing up her debut CD.

Matthew Mayfield
Lead vocalist/guitarist for Moses Mayfield who was writing his own songs by 12. For him, songwriting is about connecting on a personal, emotional level, “dealing with my own demons and other peoples’ demons, vicariously.” Moses Mayfield has opened for Switchfoot, The Fray, My Morning Jacket and will be opening for Pete Yorn in early ’07. Debut release on Columbia set for March 27.

Curtis Richardson
Has written for Jennifer Lopez and LL Cool J (No. 1 hit “All I Have”), Joss Stone, Rihanna, Sharissa. Coming up in ’07, Curtis will be writing with Craig David, Kelly Clarkson, Carrie Underwood and Chaka Khan.

Steven Sater
A multiple threat with projects in theatre, film, music and television. Sater makes his Broadway debut with the book and lyrics to Spring Awakening. His partner, Duncan Sheik, wrote the music to the smash musical, which topped some of 2006’s Ten Best lists from Time Magazine, USA Today, New York Magazine and both critics from Time-Out New York and The New York Times, placing Spring Awakening among the front-runners for this year. In just a matter of weeks, the CD is already No. 3 on the Billboard charts for Cast Albums and Virgin’s No. 1 best seller for Cast Albums.

Duncan Sheik
Grammy-nominated singer/songwriter/recording artist who scored for film and the stage; produced Gold records for himself and his peers; year-long ride on the pop charts with “Barely Breathing”; new CD White Limousine. Broadway debut with writing partner Steve Sater of critically acclaimed Spring Awakening, the new musical based on Frank Wedekind’s controversial 1891 play about a young person’s sexual awakening.

Brent Smith
Lead singer and songwriter for Atlantic platinum recording artists, Shinedown. Brent currently co-wrote the album cut, “There and Back Again” with RCA chart-topping American Idol finalist Daughtry and is currently co-writing in all genres, including rock, pop and country.