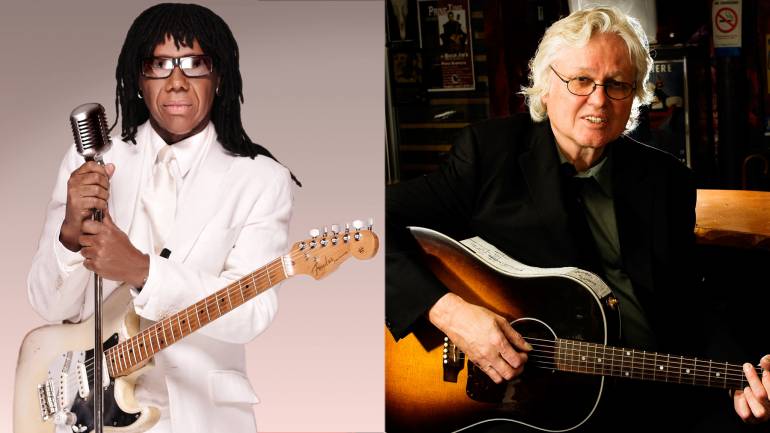 BMI congratulates its affiliates Nile Rodgers, Chip Taylor, Seymour Stein and Nick Jonas, who are being celebrated at this year’s induction ceremony for the Songwriters Hall of Fame. Established in 1969, the Songwriters Hall of Fame serves as the bridge between music’s past and present, honoring the contributions of musical pioneers while nurturing the next generation of songwriters. As accomplished and prolific writers with many hits to their respective names, Rodgers and Taylor are being inducted, while Seymour Stein will be receiving the Howie Richmond Hitkmaker Award and Nick Jonas is to receive the Hal David Starlight Award.

As one of the founders of Chic, Nile Rodgers crafted a signature blend of sleek, sophisticated dance music, deftly meshing elements of pop, R&B, funk and disco into an elegant and imminently recognizable hybrid that defined the ‘70s with iconic classics like “Everybody Dance” and “Le Freak.” Alongside partner Bernard Edwards, Rodgers turned Chic into a consistently chart-dominating hit-machine whose influence remains palpable to this day. Chic’s success prompted Rodgers to disseminate his magic, lending his considerable talents to other music creators as both writer and producer. The roster of his collaborators and their accompanying successes – from Sister Sledge to Diana Ross to Madonna to David Bowie – is inexorably woven into the history of pop music.

As the creative mind behind timeless radio staples as Merrilee Rush’s recording of “Angel of the Morning” (later recorded by Juice Newton) and the garage rock classic “Wild Thing” by the Troggs, singer/songwriter Chip Taylor didn’t accrue the nickname “Tune Tailor” for nothing. A versatile songsmith, Taylor has penned rock, pop and country hits that have been recorded by a list of musical luminaries that is as stylistically diverse as it as distinguished, including names like the Hollies, Willie Nelson, Lita Ford, Janis Joplin, Marshall Crenshaw, Fats Domino, Waylon Jennings, Linda Ronstadt, Emmylou Harris, Anne Murray, Nina Simone, Aretha Franklin, Dusty Springfield, Frank Sinatra and many, many more. Moving from behind the scenes, Taylor’s been a tirelessly capable music creator in his own right, having recorded over 25 albums, and is considered a pioneer in the alt.country movement. As American songwriters go, Taylor is unequivocally a veritable national treasure.

Another BMI affiliate receiving an honor this year is Seymour Stein, the co-founder and chairman of Sire Records. Stein is being awarded the Howie Richmond Hitmaker award for his contributions as a star-making, trend-shaping arbiter of taste, and given his forward-thinking endeavors on behalf of Sire Records, it is an accolade that is richly deserved. Without Stein’s intuition – having the foresight to recognize the validity and potential appeal of an until-then richly misunderstood new generation of artists – punk and new wave would probably have remained trapped underground. Thanks to Stein’s passion, risk-taking and sagacity, Sire turned acts like the Ramones, Talking Heads, the Pretenders, Madonna, Depeche Mode, the Smiths, the Cure, Echo & the Bunnymen, the Cult, the Replacements , Wilco, Dinosaur Jr., My Bloody Valentine and countless more into the iconic names they are today. As a mover, shaker and executive, Seymour Stein embodied a “music first” approach, and enriched the music industry – and the world – as a direct result.

A fourth BMI affiliate being feted by the Hall is Nick Jonas, who’ll be receiving the eminent Hal David Starlight Award. An impressive honor for the ambitious 23-year-old Jonas, the Hal David Starlight Award specifically recognizes young songwriters whose original work has impacted the music industry. True to that standard, Jonas has been a prolific force on the American pop music scene as a founding member, writer and performer in the Jonas Brothers, a writer for Demi Lovato and as a successful solo artist in his own right. His 2014 eponymous solo debut album went triple platinum, spawning multiple successful singles, and his follow up album, Last Year Was Complicated, is slated for a June 10 release.

BMI is very proud to see these four individuals attain this recognition. The gala and induction ceremony will take place on June 9 at the Marriott Marquis Hotel in New York City.