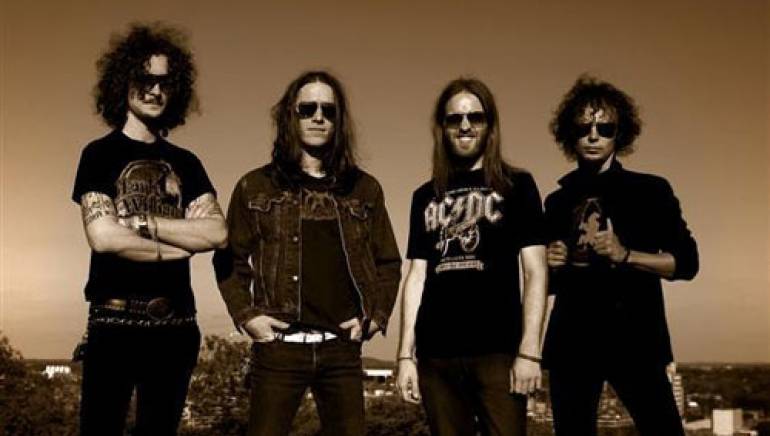 Four months after Bang Bang Bang’s big-bang formation in June 2005, 300 Paying customers were coming to see them at a nightclub in their native city of Nashville, TN. A few months after that, they were winning over 15,000 appreciative rock and roll fans as the opening act for the legendary Lynyrd Skynyrd. “By the end, we were high-fiving people in the audience,” recalls lead singer and principal songwriter Jaren Johnston of the Skynyrd show. “We were like, ‘Fuck, yeah!’”

But that’s just how things go for Bang Bang Bang. When confronted with the bands irresistible, infectious brand of greasy, sleazy Southern rock, spiked liberally with punk energy and pop songwriting smarts, new listeners typically don’t put up much resistance. “It’s a high energy rock and roll thing,” says drummer Neil Mason of the quartet’s electrifying live show. “It’s all about crowd interaction.” “Everybody’s usually singing along,” adds Johnston. “It’s great to see how people react. People are excited about the buzz that we’ve built—which is awesome to see, because we’ve worked so hard to get here.” This, too, is true. Bang Bang Bang may have only existed since 2005, but its members—and their respective resumes—goes back a lot further. All the Bangers grew up in Nashville, TN, and three of the four attended Hume-Fogg High School there together. “We all knew each other, and we were in bands together throughout high school. We went through the drug phases, the drinking phases—which we’re still in,” jokes Johnston. “We did all that together.”

The band’s abiding friendships, which stretch back a decade now, have only grown closer through playing as many as 200 shows a year. They know each other now as only siblings do. “When Kelby gets quiet, that means he’s hungry,” notes Johnston with a chuckle. “When Ben’s drunk and tired at the end of the night, it’s time to go.” “It’s the most fun band I’ve ever played in,” declares lead guitarist Ben Brown. “Not just for the music, but because I get to hang out with these guys all the time.” In addition to a long personal history, the members also have a wealth of hard-won music-business experience behind them. Mason and Brown were in the acoustic-rock band Llama, which released one major-label album; Johnston played drums in The Kicks, who released two efforts on large independent labels. Both were dropped by those same labels and promptly dissolved, leaving all involved a little unsure about the future. “We’ve seen the other side of things,” notes Johnston. “The things we did wrong with those bands, we now get to do right.”

Doing things right officially began one day at that most rock-and-roll of locations, the Smoothie King. Johnston began telling his old friend Mason (who worked there) about the fiery rock songs he’d been writing, and Mason took a listen. The band experimented with a few lineup variations, but when Kelby Ray took over bass duties, the chemistry was finally correct. The band’s varied influences—from The Black Crowes and Lenny Kravitz to The Sex Pistols and The Dead Kennedys—began to gel. “We want to be able to play Bonnaroo, and then go on the road with the Strokes,” explains Johnston. “Go out with Bloc Party, then hit some Black Crowes dates.” Why not? The band’s furiously energetic, effortlessly hooky sound has already inspired a wild variety of audiences to surrender to the urge to dance, headbang, sing along and whatever else the group’s sweaty, kinetic music brings to mind in the moment.

Its lineup settled, the band was soon packing shows with fellow “Movement Nashville” rock acts like AutoVaughn and Jeremy Lister, being namedropped in Rolling Stone by pals The Pink Spiders and opening for O.A.R. at Nashville’s world-famous Ryman Auditorium (Ray’s third gig ever as bass player) and country-rock royalty Shooter Jennings all over the place. They quickly attracted and enlisted high-powered management, booking, publishing companies and ultimately a record deal with Warner Brothers.

Bang Bang Bang are ready to explode—and things can’t happen too quickly for these hard-working road dogs. “The faster it gets and the more intense it gets,” declares Brown, “the more fun it gets.”

“Within a year, we’ve built up this thing,” marvels Johnston. “We’ve kinda taken over Nashville, and we’re trying to do the same thing all over the place. We’ve spent the last year building this team to where it’s gonna be unstoppable. We want to be so damn big you can’t not know who we are.”