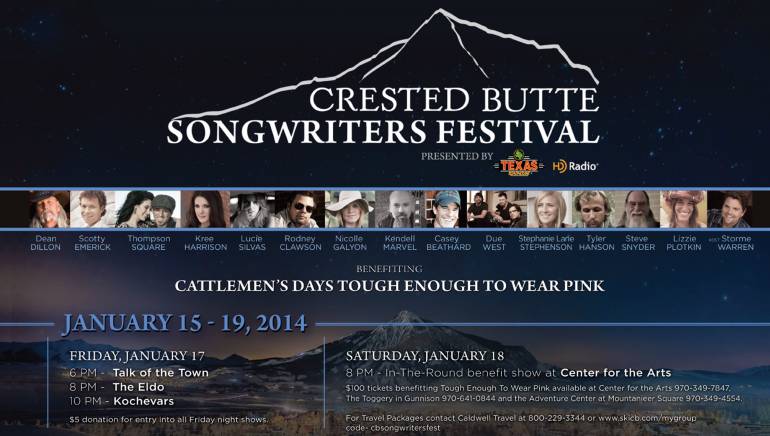 Following the immense success of the inaugural 2012 edition and 2013’s expanded five-day blowout, BMI songwriters will once again return to the snowcapped peak of Crested Butte, Colorado, January 15-19, 2014, for the Crested Butte Songwriters Festival. The BMI event, in partnership with the Crested Butte Mountain Resort’s Elevation-hotel-and-spa, Texas Roadhouse and HD Radio, takes pride in sharing with the world the names and faces of the BMI songwriters behind some of today’s biggest hit songs. Featuring both in-the-round acoustic showcases and more casual, intimate performances, songwriters and fans alike are given a unique opportunity to share stories and mingle, while all proceeds from the festival will once again benefit Cattlemen’s Days Tough Enough to Wear Pink, an organization tirelessly dedicated to fighting cancer and other illnesses.

Topping the lineup will be veteran BMI songwriter Dean Dillon along with Rodney Clawson, Thompson Square and Casey Beathard. Fresh off of American Idol, Kree Harrison will also be swapping songs and stories, as will Lucie Silvas, Scotty Emerick, Due West, Kendell Marvel, Nicole Galyon and a host of local songwriters.

For more information on this not-to-be-missed event, visit SKICB.com.