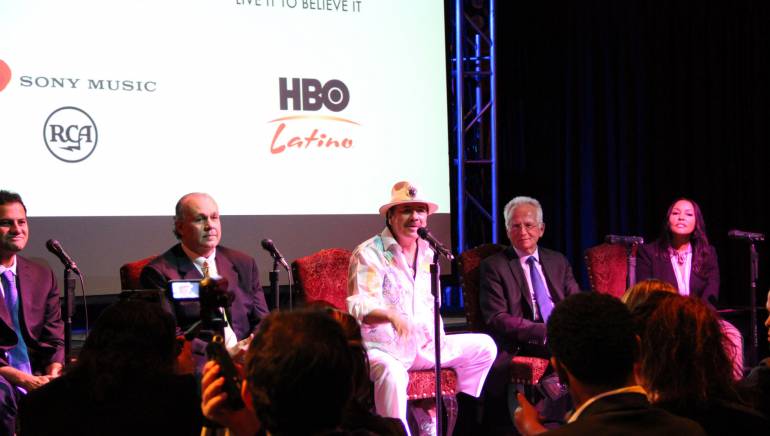 Carlos Santana had some exciting news to share during Latin GRAMMY week in Las Vegas. At a press conference held at the House of Blues on November 20, the Broadcast Music, Inc. Icon unveiled his new single, “La Flaca,” a danceable duet with fellow BMI superstar Juanes, which serves as the first taste of his upcoming album, Corazón, due in the spring of 2014. The very personal project will see Santana collaborate with some of the biggest names in Latin music. Santana is currently in the studio in Las Vegas recording many of the superstar collaborations for Corazón with producer Lester Mendez at the helm. An exact release date for the album and further details will be announced soon.

During the press conference, Santana also announced “Corazón, Live From Mexico: Live It to Believe It,” a special homecoming concert experience to take place December 14 at the Arena VFG in Guadalajara, Mexico, in conjunction with the Mexico Tourism Board. Guadalajara was selected by Santana and Sony Music as the location for the concert to celebrate Santana’s Mexican roots and to honor Mexico’s people, its culture and its history. Famed director Nick Wickham will be at the helm shooting the concert film, scheduled to air in spring 2014 on both HBO Latino and HBO Latin America. It will later be released on DVD via RCA/Sony Latin Iberia.