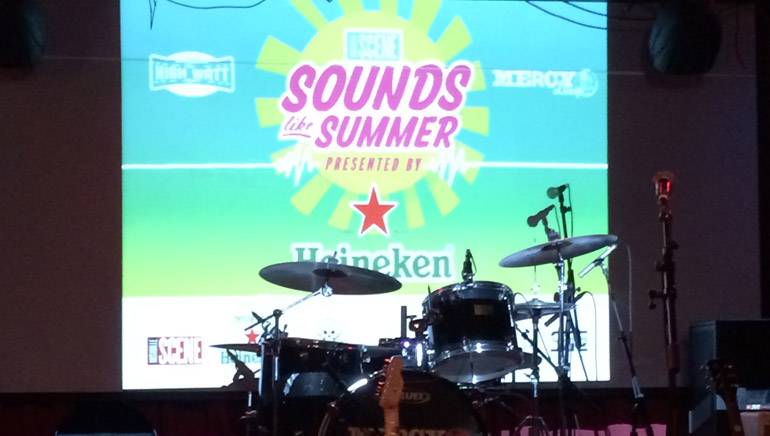 BMI, along with Nashville weekly alternative publication ‘The Nashville Scene’ and other sponsors, hosts the Sounds Like Summer showcase. The series spanned two nights, August 29 and 30, 2014, and two venues, Mercy Lounge and the High Watt.

Broadcast Music, Inc. sponsored the “Sounds Like Summer” showcase August 29 and 30, 2014, at Nashville’s popular Mercy Lounge and the High Watt venues. Co-hosted with Nashville’s alternative weekly paper, The Nashville Scene, and its music blog, Nashville Cream, a total of thirteen acts took the stages during the two-night showcase.

The first night had bands ranging from Nashville garage rockers Shy Guy to Ranch Ghost, a lo-fi indie rock group. Stone Jack Jones broke up the indie rock streak with a banjo-backed folk set while James Wallace and the Naked Light, a folk group based in Nashville, displayed their quiet but powerful songwriting skills. Taking a break from recording a new album, Clear Plastic Masks, rock n’ rollers out of New York, joined the showcase, and to cap off the evening, Boston’s psychedelic-rock group Quilt closed out the show at the High Watt. Nashville rock group Fly Golden Eagle brought the Mercy Lounge sets to an end.

On the second night, twangy rockers Promised Land Sound opened with a set of songs so new they have yet to be recorded for their upcoming album. Crooner Courtney Jaye showcased her talent with original bohemian rock tracks and the Magnolia Sons brought out the big band sound, playing songs with a group that barely fit on the stage. Closing out the Mercy Lounge sets was Alanna Royale, who previewed tracks from her upcoming album to be released September 16. The second night also doubled as an album release party for the Coolin’ System, a soul-funk band out of Nashville. Showing their support for the Coolin’ System, Soul band AJ and the Jiggawatts played the High Watt, joining them on stage at the end of the night for a brass-filled soul dance party.

Both nights served to show the diverse range of musical styles that bring bands through Nashville each year. From folk to psychedelic rock, garage band to big band soul sounds, the Sounds Like Summer showcase featured a wide sampling for every music fan.