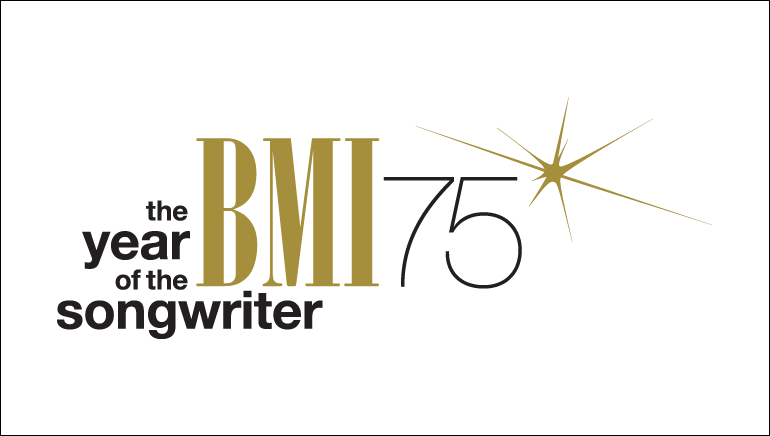 Broadcast Music, Inc. yesterday announced the official launch of its 75th anniversary celebration at the National Association of Broadcasters (NAB) convention in Las Vegas, during the 66th Annual BMI/NAB Dinner, pronouncing April 2014 through April 2015 to be “The Year of the Songwriter.” The Company’s dynamic yearlong anniversary campaign will underscore the commitment BMI exhibits every day to valuing music and opening the doors to songwriting careers for generations of past, present and future music creators.

To mark this milestone anniversary, BMI revealed multiple upcoming initiatives that will celebrate the craft of songwriting and honor those who create the music that touches the world. Projects include 75 Years of American Music, a pictorial book authored and art directed by Bob Guccione, Jr., founder of SPIN magazine, which uniquely unveils the dramatic history of American music through incomparable images and interviews with legendary BMI writers; compelling new video series on BMI TV, featuring top songwriters sharing the stories behind their songs and taking us inside their studios; live concert events; and original opportunities for emerging writers to help propel their careers. BMI will also continue to be the key driver of new public policy initiatives, such as the recent Songwriter Equity Act, to protect the copyrights of its songwriters in the digital age.

The plan for the creation of BMI was approved at the 1939 National Association of Broadcasters Convention in Chicago, making its annual convention a fitting venue for this announcement. Commenting on “The Year of the Songwriter” campaign, BMI President Del Bryant said, “BMI’s songwriters have been the catalyst for the explosion of American music that has traveled around the world. Last night, some of music’s brightest stars joined us at the 66th Annual BMI/NAB dinner – our honoree, 10-time GRAMMY winner Kenny “Babyface” Edmonds, whose songs have produced sales in excess of 500 million units worldwide; the prolific Claude Kelly; hitmaker Makeba Riddick; actress and songstress Emily Kinney; and country legend Randy Owen. Our anniversary celebration is a tribute to the immense talent of these and all of our songwriters. We are honored to have served our music creators for 75 years and look forward to an ongoing partnership, one in which BMI continues its role as the trusted bridge between the musical creator on one hand and the businesses that fairly use music on the other. In doing so, we continue to manage the creative ecosystem and foster the development of more of the music that benefits us all.”

BMI CEO Mike O’Neill added, “BMI’s milestone anniversary is an opportunity to thank our songwriters for their incredible contributions to culture and the arts through their exceptional songs. ‘The Year of the Songwriter’ is an exciting chance for us to salute their history and share their success with the businesses who understand the value of music. Looking ahead, we will continue to facilitate a landscape that best serves both our affiliates and licensees, as we enter into the next groundbreaking chapters of BMI music.”