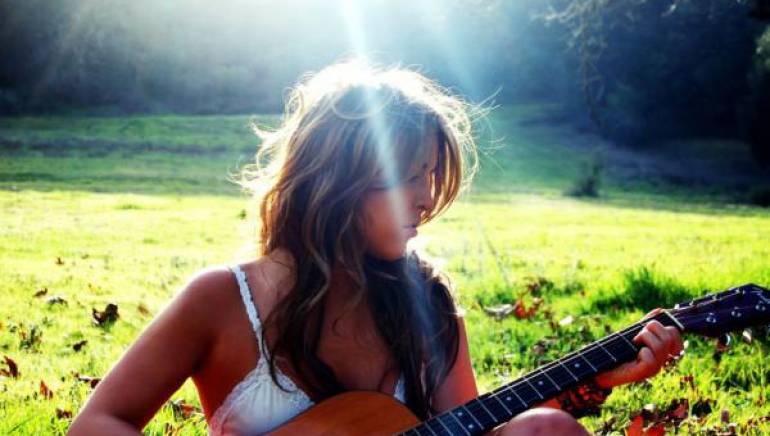 “I had never entered a contest like this before,” says Mills. “I had no idea what to expect. When I won, I was so surprised!”

BMI staged the contest to help celebrate 25 years of South By Southwest, which BMI has proudly sponsored since its inception. The contest, which called upon BMI songwriters to submit photos of either what inspires them or how they look when they are inspired to create, offered a monster of a prize: a SXSW package including roundtrip airfare for two, a three-night hotel stay in downtown Austin, and two SXSW badges.

When Mills came across the contest on Facebook, she recognized instantly which photo to submit. “I knew it’d be that photo,” she remembers. “The shot isn’t really about me as an artist. The photo itself is art. It is inspirational.”

Mills’ galvanized fans rallied, sending links to her music and the contest, drumming up waves of voters and growing her fanbase along the way. “I was blown away by everyone’s support,” she says. “My fans told their friends, who then turned around and told their friends. This experience has made me so much more confident, both as a person and as an artist.” The next thing Mills knew, she was SXSW bound. She decided to bring friend Amanda MacNeil—the photographer behind the prize-winning shot—along as her wing woman.

“I’d toured through Texas but never been to Austin before,” she says. “I moved to Nashville from Los Angeles about eight months ago. I moved here because I really wanted to hone my craft as a songwriter.”

During the festival, Mills hit industry parties, soaked up Austin, and dove in to SXSW’s break-neck pace, wherein the cardinal responsibility is to “hang, network, and listen to music.”  “Every member of the BMI team was awesome, but Candi Shand, Jody Williams, and Mark Mason really treated us like royalty. We felt like rock stars,” Mills says, laughing. “Thanks to BMI, SXSW was a truly amazing experience.”

Asked to pinpoint her best SXSW 2011 moment, Mills doesn’t hesitate: “After admiring her for years, I saw Lucinda Williams live.” Williams headlined the SXSW Lost Highway Records 10th Anniversary Revue, presented by BMI. “As a singer and a songwriter, I could not have been more inspired.”