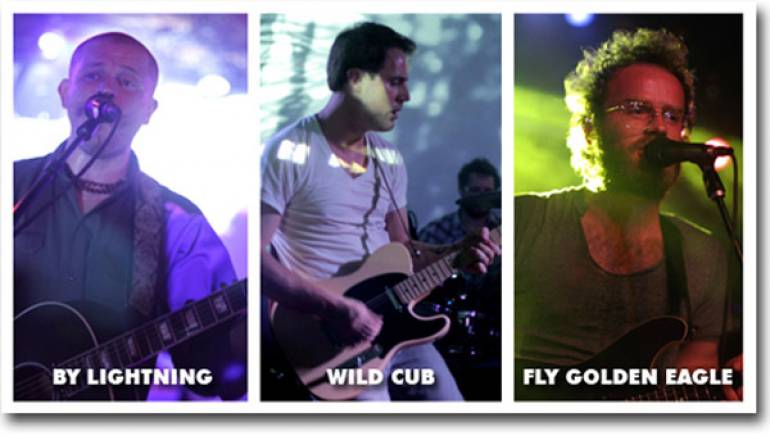 BMI will dispatch three of the freshest voices from Nashville’s thriving independent rock scene to the 2012 Bonnaroo Music and Arts Festival. The 4th annual Road to Bonnaroo contest victors By Lightning, Wild Cub, and Fly Golden Eagle each earned slots in the festival’s Great Taste Lounge Brewed by Miller Lite, where they will serve as ambassadors of Nashville’s spit-polished Southern eclecticism.

Sponsored by BMI, Mercy Lounge, the Nashville Scene, and the Bonnaroo Music and Arts Festival, BMI’s Road to Bonnaroo competition took place over the course of three 8 off 8th shows – February 27, March 26, and April 16 – at Nashville hot-spot The Mercy Lounge. As the live-action litmus test, eight bands performed three-song sets during each installment of the series. To select the evening’s top contender, an industry panel comprising local music journalists, bloggers, and 8 off 8th hosts contributed one half of the verdict, while fan-voting through onsite ballots determined the other half.

BMI’s involvement underscores the organization’s vital role as an early career counselor and support system for aspiring songwriters and bands. As an initial point of contact for burgeoning artists, BMI serves as a fundamental bridge, connecting promising talent with industry decision-makers, as well as invaluable opportunities, including performance slots on stages at SXSW, the Austin City Limits Music Festival, Lollapalooza, and the Bonnaroo Music and Arts Festival.

WILD CUB
Saturday, June 9 – 2:40 p.m.
Great Taste Lounge Brewed by Miller Lite
Led by singer/songwriter/film score composer Keegan DeWitt and young Nashville music mainstay Jeremy Bullock, Wild Cub made their official debut at SXSW this year at the Billy Reid & K-Swiss Shindig. The young band, who only officially formed last November, came together after touring over the past year around DeWitt’s prior solo releases as part of Daytrotter’s 4th Barnstormer tour, supporting Jeremy Messersmith. Wild Cub is currently putting the finishing touches on their debut LP, recorded in a makeshift studio in Bullock’s home and due out later this summer.
http://wildcubmusic.com/

FLY GOLDEN EAGLE
Sunday, June 10 – 12:00 p.m. Great Taste Lounge Brewed by Miller Lite
Ben Trimble has spearheaded Fly Golden Eagle for over five years, first playing shows with a boombox, and since evolving into a full-fledged band that has released three hook-laden albums and an EP. They’ve played a relentless amount of shows, both in their hometown of Nashville, as well as out and about, sharing bills with JEFF the Brotherhood, the Alabama Shakes, White Denim, Ranch Ghost, Strange Boys, Bear Hands, PUJOL, and Stardeath and White Dwarfs. They also played VICE magazine’s day party at SXSW, and were one of three bands from across the world to be accepted for the Banff Indie Band Residency in 2011. Fly Golden Eagle’s full-length album, Swagger, was released last year.
http://flygoldeneagle.tumblr.com/