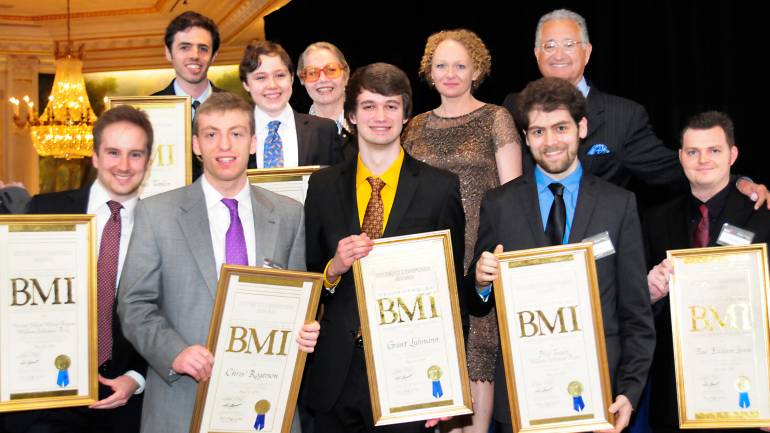 Renowned American composer and former winner of the Pulitzer Prize in Music Ellen Taaffe Zwilich, BMI President Del Bryant and BMI Foundation President Deirdre Chadwick, on behalf of Broadcast Music, Inc. and the BMI Foundation, announced the eight young classical composers, ages 14 to 27, who have been named winners of the 62nd Annual BMI Student Composer Awards. The announcement, which was made at a reception held on May 16, 2014, at the J. W. Marriott Essex House Hotel in New York City, awarded the winners scholarship grants to be applied toward their musical education. This year, more than 300 manuscripts were submitted to the competition from applicants throughout the Western Hemisphere, and all works were judged anonymously by distinguished jury members: Kristin Kuster, Ingram Marshall, Bernard Rands and Kevin Puts. The preliminary judges were Alexandra DuBois, David Fulmer, Shafer Mahoney and Sean Shepherd. Zwilich is the permanent Chair of the competition.

Phil Taylor – William Schuman Prize, awarded for most outstanding score (tied this year with Michael Boyman) – age 24, studies at the University of Chicago

Daniel Temkin – age 27, studies at the University of Southern California

Deirdre Chadwick, Executive Director for Classical Music at BMI as well as President of the Foundation, commented, “The BMI Student Composer Award is one of the most prestigious awards that a young composer can earn, and I’m honored to be part of its long history.” Chadwick continued, “Nothing gives me greater pleasure than shining the light on these young artists at a critical stage in their careers.” BMI, in conjunction with the BMI Foundation, has awarded nearly 600 grants to young composers throughout the history of the competition.

At the reception, Chadwick also announced the opening of the BMI Student Composer Awards special collection at the New York Public Library for the Performing Arts at Lincoln Center. This collection was started by BMI Foundation President Emeritus Ralph N. Jackson and NYPL Chief of the Music Division George Boziwick. The collection will hold many of the winning works from the course of the 62-year competition and is open for perusal to the public.

Michael Boyman (Tightrope Walker for orchestra)
Composer and violist Michael Boyman is the recipient of the 2011 International Music Prize for Excellence in Composition. An alumnus of the New York Youth Symphony, Mike served as principal violist of the orchestra from 2010-12 and was a member of Making Score, the organization’s composition program. A graduate of New York University, where he studied political science and music composition with Justin Dello Joio, Mike is currently pursuing a Master’s Degree in Composition studying with Richard Danielpour at the Manhattan School of Music. He also serves at the school as a Fellow in the Center for Music Entrepreneurship.

Saad Haddad (Mai for string quartet and electronics)
Saad Haddad’s music has reached audiences from all around the world, with performances by the Los Angeles Philharmonic, the American Composers Orchestra, the Sonus Quartet, the Vancouver Chamber Choir, and the Hollywood Master Chorale, among many others. In May/June, he will serve a four-week residency at the Copland House as one of the winners of the 2014 Copland House Residency Award. His orchestral work, Maelstrom, was read by the American Composers Orchestra as part of the 2013 Underwood New Music Readings under the mentorship of composers Robert Beaser, Joan Tower, and Christopher Theofanidis. Past accomplishments include the summer of 2011, when Saad was mentored by composer Samuel Adler in Berlin as part of the FUBiS program. In addition, from 2007-2009, Saad became part of the first group of high school composers to participate in the acclaimed Los Angeles Philharmonic Composers Fellowship Program, where he was commissioned to compose Heart of the Hall for the Los Angeles Philharmonic.

Saad is currently completing a Bachelor’s in Music Composition at USC’s Thornton School of Music, where he studies under Bruce Broughton, Frank Ticheli, Stephen Hartke, and Donald Crockett.

Paul Eddison Lewis (The Ninth Gate for contrabass quartet)
Paul Eddison Lewis has composed a variety of works, ranging from electronic to large ensemble works, with ten world premieres during the last year. His involvement in electro-acoustic music has resulted in several works for fixed media and live instrument and electronics. In 2014, Paul’s work The Ninth Gate for contrabass quartet was honored with the highly coveted BMI Student Composer Award.

Having earned an Associate of Arts degree from Hillsborough Community College, Paul is currently pursuing a BM in Composition from the University of South Florida. His primary composition teachers include Paul Reller and Baljinder Sekhon.   In addition to his compositional achievements, Paul is an active contrabassist, performing with the USF Symphony Orchestra under the direction of William Wiedrich and the Mostly Pops Orchestra under the direction of Robert Romanski.

In addition to composing, Grant is cofounder of the youth community activism group, Young Musicians of Minnesota, a group originally formed to voice students’ dissent with the Minnesota Orchestra lockout. The program delivered highly-praised summer youth symphony concerts in 2013 performed alongside Musician of the Minnesota Orchestra and continues high-profile work across the state, frequently earning state and national media attention.

Grant is a Jacobs Scholar at Indiana University, pursuing a BM in composition with a concentration in oboe performance. He studies composition with Don Freund and previously studied with Libby Larsen. He also studies oboe with Roger Roe. Grant is a member of ASCAP and publishes through his own company, Mondegreen Press.

Chris Rogerson (String Quartet No. 2)
Hailed by the Washington Post as a “confident, fully-grown composing talent,” Chris Rogerson’s music has been praised for its “virtuosic exuberance” and “haunting beauty” (New York Times). His works have been performed by the Kansas City Symphony, New World Symphony, Buffalo Philharmonic, Grand Rapids Symphony, and New York Youth Symphony at venues including Carnegie Hall, the Kennedy Center, and the Library of Congress. Chris has won awards and fellowships from the American Academy of Arts and Letters, the MacDowell Colony, Yaddo, Aspen Music Festival, ASCAP, BMI, and the Theodore Presser Foundation.

He is managed by Young Concert Artists and attended the Curtis Institute and Yale University. Chris is currently a doctoral fellow at Princeton University studying with Steve Mackey.

Phil Taylor (Chiaroscuro for chamber orchestra)
Phil Taylor (b. 1989) grew up in Salem, Oregon and received a B.Mus. in composition summa cum laude from Willamette University. He is currently pursuing a doctorate in composition at the University of Chicago and studies with Augusta Read Thomas and Howard Sandroff. In addition, Phil has worked extensively with Shulamit Ran, Marta Ptaszyńska, John Peel, and Jan Sandström. He has also collaborated with the artists of Pacifica Quartet, eighth blackbird, Duo X, the Imani Winds, the Spektral Quartet, the Willamette Chamber Players, and fEARnoMUSIC and maintains an active role as a pianist in Chicago. This is his second BMI Student Composer Award; his BMI-winning work will be publically read at the University of Chicago under conductor Cliff Colnot in June.

Daniel Temkin (From Distant Dreams for orchestra)
Daniel Temkin’s music has been widely performed by leading ensembles, including the Nashville Symphony, the St. Petersburg Chamber Philharmonic, the Buffalo Philharmonic, the Aspen Music Festival Orchestra, the Curtis and Rutgers Symphony Orchestras, the PRISM Saxophone Quartet, the Trio-ING piano trio, and others. Daniel has received commissions from the Rock School for Dance, the George Markow-Totevy Foundation, the Lyra Harp Society, and private donors. In addition, his work has been supported by awards and grants from ASCAP, BMI, New Music USA, the American Composers Forum, the Theodore Presser Foundation, and other leading arts organizations. Daniel was the 2012 Young Artist Composer in Residence at the Music from Angel Fire festival, as well as a fellowship composer at the Aspen, Fontainebleau, and Brevard Music Festivals.

Originally a percussionist, Daniel has performed with the Orchestra of St. Luke’s, and the Riverside Choral Society. He has played under conductors David Zinman, James Conlon, and Leonard Slatkin, and is featured on recordings of the Albany and Naxos labels.

Daniel holds a BM in Percussion from Rutgers University, an MM in Composition from New England Conservatory, and an AD in Composition from the Curtis Institute of Music. He studied percussion with She-e Wu and Chris Deviney, and composition with Charles Fussell, Michael Gandolfi, Jennifer Higdon, and Richard Danielpour. Daniel currently lives in Los Angeles, CA where his is a Doctoral Fellow at USC’s Thornton School of Music under the tutelage of Donald Crockett and Stephen Hartke.

Benjamin P. Wenzelberg (Midnight Tides: A Three Movement Piano Trio for violin, cello, and piano)
Benjamin P. Wenzelberg is a fourteen year-old composition student at Juilliard Pre-College, studying with Dr. Eric Ewazen. Benjy was awarded the 2014 ASCAP Morton Gould Young Composer and Charlotte Bergen Scholarship Prize for his opera, The Sleeping Beauty. In addition, his percussion piece, The Storm, had its world premiere this October by the NYU Percussion Ensemble.

Aside from composition, Benjy is currently singing and performing in his fifth season with the Metropolitan Opera Children’s Chorus, and made his MET soloist debut this season in A Midsummer Night’s Dream. This spring, he sang Chichester Psalms with the Portland Symphony Orchestra in a performance narrated by Jamie Bernstein. Benjy has also been a soloist at Carnegie and Avery Fisher Hall, Shakespeare in the Park, the US Open, in Israel, and has performed with the New York Philharmonic and the Atlanta Opera. His portrayal of Miles in NY City Opera’s The Turn of the Screw last spring received rave reviews. He is currently featured on the track, The Silent Night, of vocal group Forte’s recently released CD.

In addition, Benjy is a classical and jazz piano scholarship student at the 92nd St. Y, and part of the NY Youth Symphony’s conducting program. He made his conducting debut at age eleven as part of the Crested Butte, Colorado Music Festival.