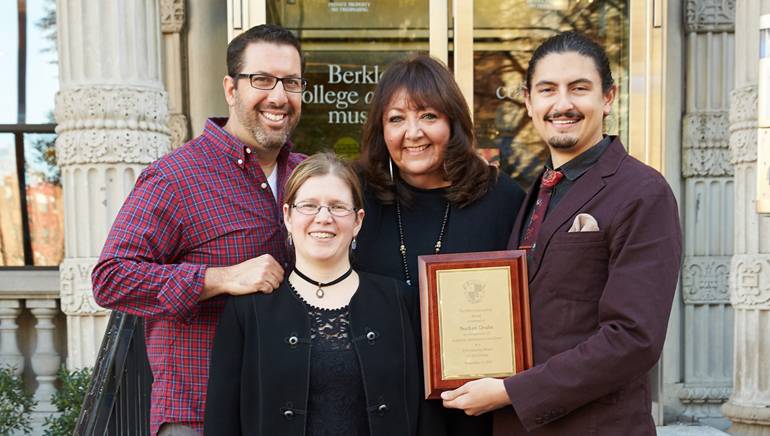 BMI is pleased to announce that Nathan Drube, a Berklee College of Music film scoring and composition dual major, has been awarded the 2015 BMI Film Scoring Scholarship, which was presented to him by BMI composer Christopher Lennertz and BMI Vice President, Film/TV Relations, Doreen Ringer-Ross. Drube, whose principle instrument is electric guitar, came to Berklee playing progressive rock and metal.

The BMI Film Scoring Scholarship is a yearly tuition scholarship given to Berklee students on the basis of compositional maturity and talent, as well as financial need. Each year, the scholarship is given in the name of a noted BMI composer. This year, the honored composer was Lennertz, whose credits include scores to Supernatural, Agent Carter, Galavant, Horrible Bosses, and Identity Thief. As part of the presentation, the award-winning composer conducted a “three course collaboration” session with a student orchestra on the college’s new Shames Family Scoring Stage, along with also teaching a master class on scoring to the eager students. To further BMI’s involvement, Ringer-Ross joined Lennertz to give a career development presentation at the college’s Film Scoring Senior Seminar.

“This scholarship continues our mission of supporting young and emerging composers at the college level,” stated Ringer-Ross. “We support Berklee’s commitment to excellence in music and film scoring and their determination to further the growth of talented, trained, and educated composers.”

Berklee College of Music was founded on the revolutionary principle that the best way to prepare students for careers in music is through the study and practice of contemporary music. For more than half a century, the college has consistently evolved to reflect the state of the art of music and the industry. Berklee is the only college in the world that offers an undergraduate degree in Film Scoring, one of the fastest growing departments in the college. With more than a dozen performance and nonperformance majors, a diverse and talented student body representing 70 plus countries, and a music industry “who’s who” of alumni, Berklee is one of the world’s premier learning labs for the music of today – and tomorrow.

For more information on Berklee College of Music, visit: https://www.berklee.edu/admissions?gclid=CKnxk6a2_MgCFRKRfgodPlIJzg.