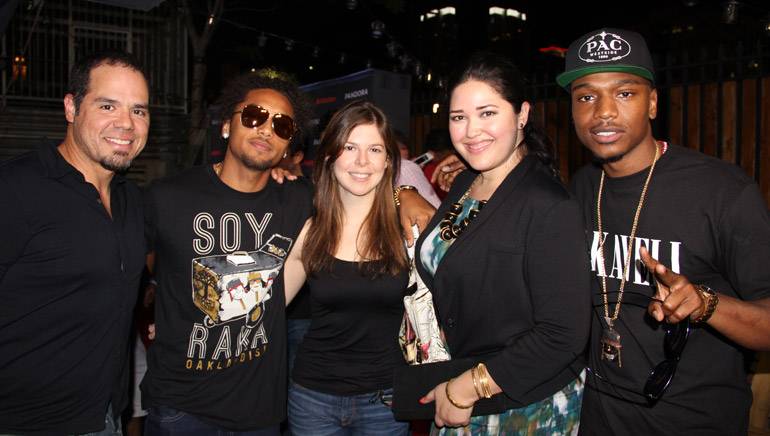 Though not on the bill for the evening at the Pandora Discovery Den 4/21, Los Rakas stopped by to support fellow BMI affiliates performing and grabbed a photo with the BMI team. Pictured (L-R) are: BMI’s Joey Mercado, Los Rakas’ Raka Rich, BMI’s Carolina Arenas and Krystina De Luna and Los Rakas’ Raka Dun.

The Billboard Latin Music Conference celebrated its 25th anniversary this year with a week of panels, performances and awards featuring Latin music’s most important players. BMI’s Latin team had a busy week in Miami, centered around a star-studded ‘How I Wrote That Song’ panel that included Elvis Crespo, Roberto Tapia, Guianko Gomez, Oscarcito, The Julca Brothers and Juan Magán(SGAE). Moderated by BMI Vice President, Writer Publisher Relations, Latin Music, Delia Orjuela, the panelists came together on April 23 to offer the audience a behind-the-scenes look into the creation of some of today’s hottest music.

Other key panels during the conference included a Q&A event with two of Latin pop’s biggest names, David Bisbal and Luis Fonsi; a ‘Digital Superstar’ Q&A session with Juanes; a panel on the making of the music for the upcoming World Cup; and The Annual Billboard Divas Panel, which featured BMI writers Kat Dahlia, La Marisoul (of La Santa Cecilia) and Gloria Trevi. The week also featured performances, the highlights of which included a night at the Pandora Discovery Den Noche De Musica Latina showcase with artists Leslie Grace, Alexis y Fido, J. Balvin and Karlos Rosé and a showcase featuring up and coming EDM artists like MilkMan.

With all of the Latin music industry’s biggest names and most promising talent in one place for a week, there were bound to be some magical moments outside of official programming. For photos of BMI Latin Songwriter Awards presentations, an inside look at Prince Royce in the recording studio, and the Universal Music after party, as well as the whole week of Billboard events, check out the slideshow below: