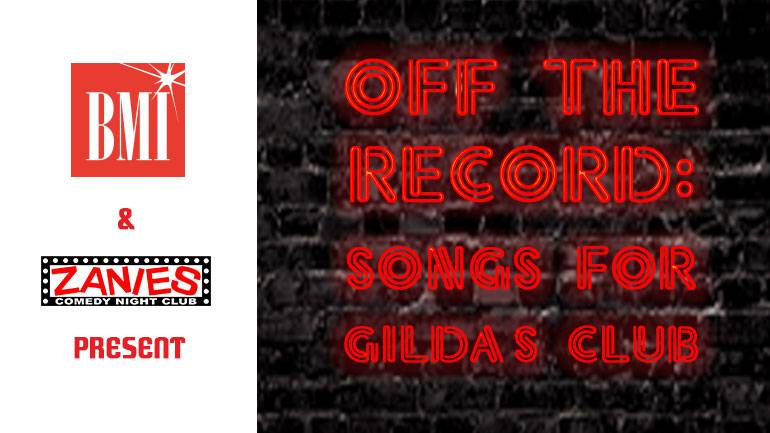 BMI is proud to partner with Nashville’s legendary Zanies Comedy Club to present “Off the Record: Songs for Gilda’s Club” on February 16, 2016, at 7:30 p.m. at Zanies. Top hitmakers Bob DiPiero and Bobby Pinson have been invited to share their irreverent and laugh-out-loud tracks, many of which have been banned from radio airplay by the FCC. All proceeds from the event will be donated to Gilda’s Club Nashville.

“We’re excited to bring together our licensees and songwriters for a fun night,” says BMI’s Mark Mason, Executive Director, Writer-Publisher Relations. “Zanies is a long-time BMI licensee and we’re happy to host this entertaining evening for a worthy cause.”

Additional singer-songwriters slated to appear include Bruce Wallace, Kim Paige, Wynn Varble, Amanda Flynn, Phil Barton, Joe Denim, Brandon Kinney and more. Hosted by comedian and musician Andrew Dorfman, the show promises to have the audience in stitches. Dorfman, who has been performing comedy for more than 20 years, says he is “happy to be part of the team” putting on such a special show.

BMI songwriter Bob DiPiero says, “I am proud to be part of the ‘Off the Record’ show at Zanies for Gilda’s Club. I think she would have loved the idea. This has inspired me to dig deep into the vault of my ‘THINGS YOU SHOULDNT SING ABOUT’ collection. It’s gonna be big fun!”

Sharing stories and songs that would make Shel Silverstein blush and Loretta Lynn proud, the musicians will donate all of the money raised to Gilda’s Club Nashville, the iconic safe haven for people impacted by cancer. The organization provides support groups, workshops, social activities and countless other resources, also available to friends and family of those affected.

“We are so excited to be a part of this unique BMI event! All of our programming is offered free of charge, which means we rely on individual and community support to keep our red door open,” says Gilda’s Club Founder and CEO Sandy Towers. “Partnering with BMI, our Music Row neighbor, makes it extra special!”