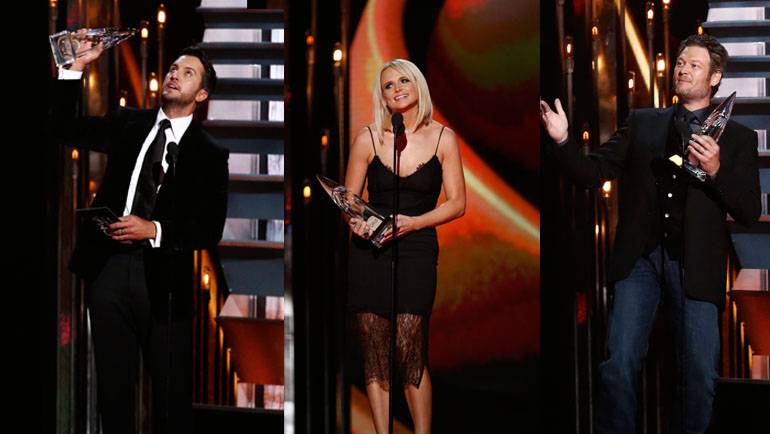 BMI songwriters swept the 2014 Country Music Association Awards last night, winning 77% of the televised awards in 11 out of the 12 categories. Broadcast from Nashville’s Bridgestone Arena, the ceremony featured dynamic performances by BMI affiliates Little Big Town, who won Vocal Group of the Year, and Kacey Musgraves, who snagged Song of the Year for “Follow Your Arrow,” among others. The star-studded event was co-hosted by BMI songwriter Carrie Underwood.

Country music powerhouse Miranda Lambert won an impressive four awards, bringing home Female Vocalist of the Year, Album of the Year, Single of the Year and Musical Event of the Year for “We Were Us” with Keith Urban. Lambert now has a record-breaking 11 CMAs to her name, including five consecutive wins for Female Vocalist of the Year, making her the most awarded female artist in the history of the CMA awards. Blake Shelton, winner of Male Vocalist of the Year, won for the fifth time as well, meeting the record set by BMI songwriter Vince Gill and George Strait, who have each also won the title five times. In addition, newly crowned BMI Icon Gill was honored with the Irving Waugh Award of Excellence, while Luke Bryan won his first CMA award for Entertainer of the Year, paying homage to his album full of hits and his tremendously popular tour. Congratulations to all!


ENTERTAINER OF THE YEAR
Luke Bryan


SONG OF THE YEAR
“Follow Your Arrow”, Kacey Musgraves


MUSICAL EVENT OF THE YEAR
“We Were Us,” Keith Urban featuring Miranda Lambert