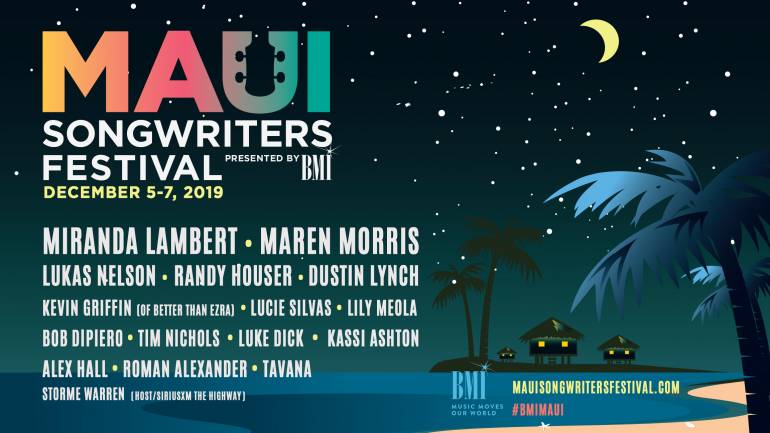 BMI is once again bringing the international acclaim of Nashville’s best songwriters to the fifth annual Maui Songwriters Festival, happening December 5 – 7, 2019. Combining the incomparable landscape of Maui, the island’s local flavor, and the best of country music, this festival puts a spotlight on the art of songwriting with intimate sets from an all-star lineup. Tickets to attend the event go on sale September 7 for all shows and can be purchased by visiting www.mauisongwritersfestival.com.

Country superstar Miranda Lambert is returning to the festival for the second year in a row and will headline the festival with support from GRAMMY winner Maren Morris. Lambert recently released her new single “It All Comes Out in The Wash,” her first solo offering in three years. Morris is also returning to Maui on the heels of her latest album release, GIRL. She is currently on a string of tour dates supporting her album and is a member of the latest country supergroup, The Highwomen. Fan favorite Randy Houser will return to the festival along with country rocker Lukas Nelson. Rounding out the impressive lineup are country hitmaker Dustin Lynch, Kevin Griffin from Better Than Ezra, singer-songwriter Lucie Silvas, and local favorites Lily Meola and Tavana. Top songwriters featured over the three-day festival include country music hitmakers Tim Nichols, Luke Dick, and BMI Icon Bob DiPiero. Also joining the festival will be up-and-comers Kassi Ashton, Alex Hall and Roman Alexander.

“I had such a great time at BMI’s Maui Songwriters Festival last year and can’t wait to be part of it again this December,” said Miranda Lambert. “I love that we can all come together and celebrate songwriters in such a beautiful place.”

“I am thrilled to be returning to the Maui Songwriters Festival this year. I first attended two years ago and fell in love with the island,” added Maren Morris. “BMI has such a great track record for bringing talent to this festival and it’s such a unique experience.”

“We are so excited to bring this stellar lineup of BMI songwriters to Maui to help celebrate our fifth year of the festival. We are even more thrilled to welcome back Miranda Lambert and Maren Morris, who have embraced this event in such a special way,” said Mason Hunter, AVP, Creative, Nashville. “Attendees will be treated to an amazing collection of talent in the most beautiful setting, and we are so appreciative of the folks on Maui and their incredible hospitality.”

Hosted by Storme Warren of Sirius XM’s The Highway, the festival will span three days and feature events in various music venues across the island of Maui, including Fleetwood’s on Front St., Fairmont Kea Lani – Maui and the Maui Arts & Cultural Center. Many of these acoustic sets will feature Nashville’s signature “songwriters-in-the-round,” where in addition to performing, songwriters share the stories behind their hit songs. A full schedule of events will be available at mauisongwritersfestival.com.

Adding a philanthropic element to the Maui Songwriters Festival presented by BMI, a portion of the proceeds will once again benefit Dorvin and Betty Leis Charities, Inc., the Maui Arts & Cultural Center and the BMI Foundation, which is dedicated to encouraging the creation, performance, and study of music through awards, scholarships, grants, and commissions.